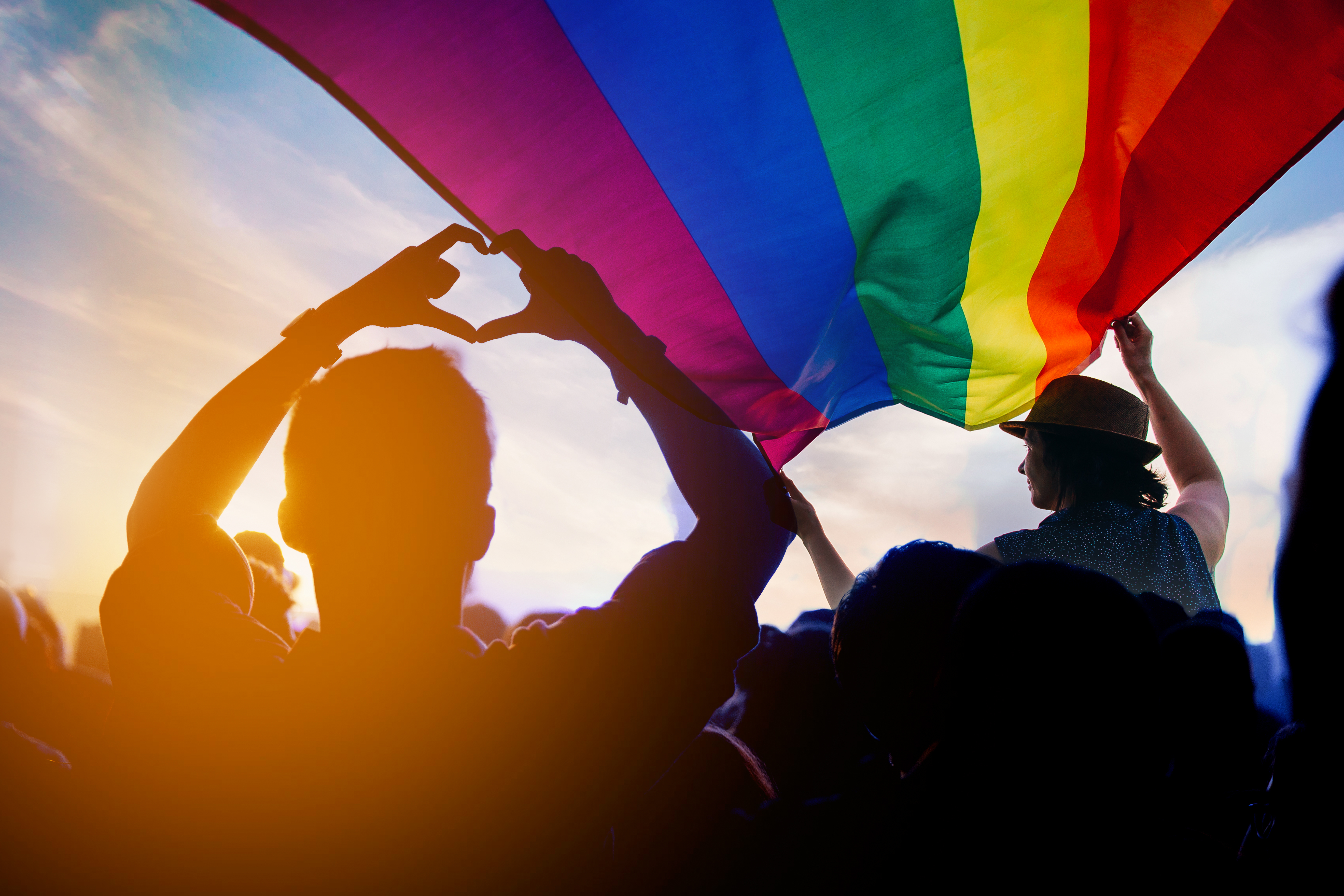 In a Forbes article last year, the LGBTQ+ community was referred to as the $1 trillion market hidden in plain sight. Engaging this group in an authentic, non-stereotypical way requires more than flying a rainbow flag. Brands and retailers need to understand LGBTQ+ shopping behavior, and what drives that behavior, to tap into this emerging force in today’s marketplace.

According to the NGLCC (National LGBT Chamber of Commerce), the LGBTQ+ community contributes more than $1.7 trillion to the U.S. economy, making them a valuable segment to understand and reach. They have a strong voice backed up by some serious buying power.

Numerator uses MicroSurvey technology helping us to easily identify LGBTQ+ consumers within our panel. To date, we have about 5,000 individuals who have self-identified as LGBTQ+. Let’s take a closer look at the LGBTQ+ consumer’s priorities, influences, technology habits, and shopping destinations.

The LGBTQ+ community loves organics, and they’re willing to pay a premium for those products. According to Numerator data, about three in 10 LGBTQ+ consumers are either “very committed” or “committed” to organics. They choose organic to support the organic movement and because they believe organic products taste better. Notice how the LGBTQ+ community indexes compared to all shoppers. 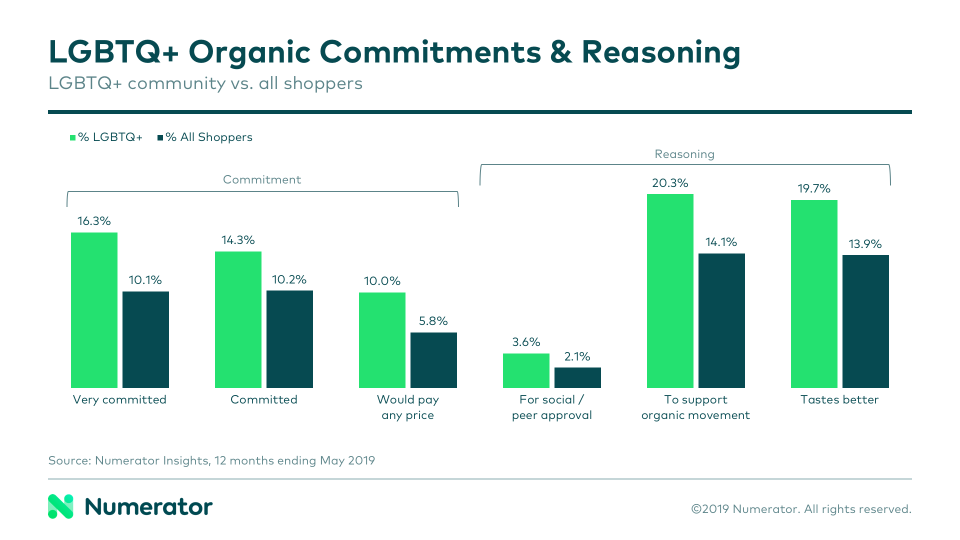 The LGBTQ+ community also tends to be adventurous eaters and creative cooks who dine out frequently to try new things. Whether dining in or out, they look for natural, organic options.

How to Connect with the LGBTQ+ Community 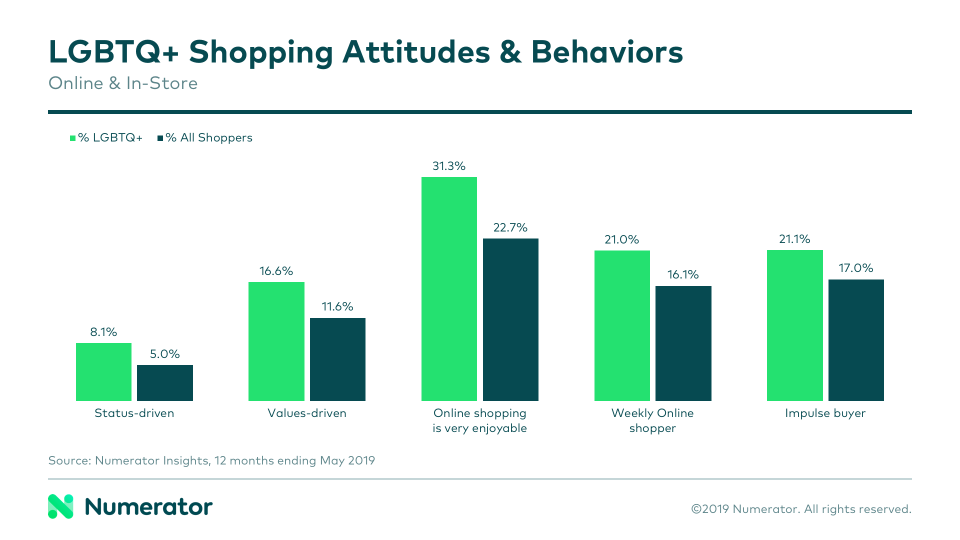 On average, the LGBTQ+ community spends about the same as all U.S. shoppers, but they make more shopping trips, especially online. More tech savvy than the average shopper, they’re more likely to:

Retailers and brands should be analyzing data for their specific categories and products to develop strategies for reaching the LGBTQ+ community, using targeted communications on relevant mobile apps and social media sites.

Where Are LGBTQ+ Consumers Shopping?

LGBTQ+ consumers are more likely to shop for groceries at natural outlets and in urban areas, according to Numerator data.

Ralphs, Whole Foods, Trader Joes, and Safeway index higher with these shoppers than the general population.
When it comes to health and beauty products, the LGBTQ+ community turns to Sephora, Amazon and Target. Walmart and Ulta Beauty Supply, however, index lower with LGBTQ+ shoppers. 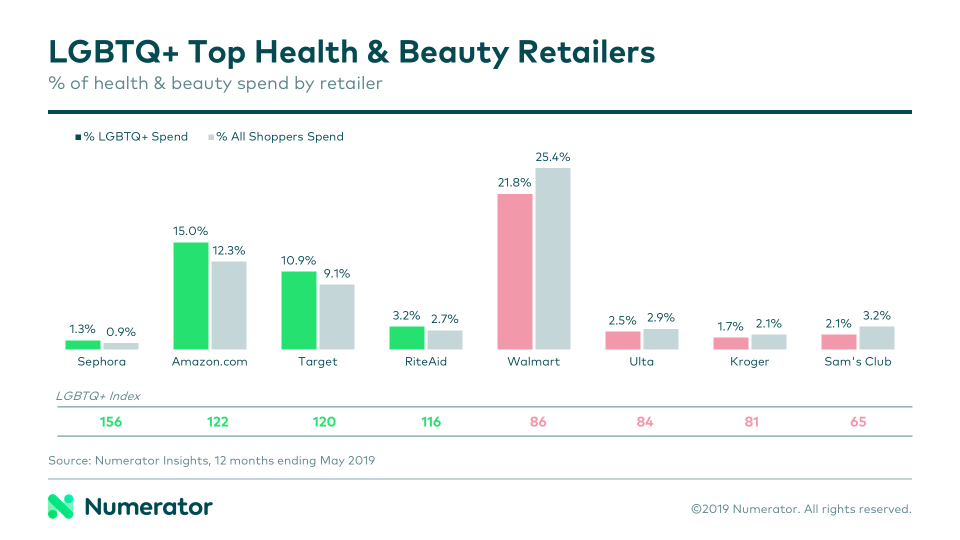 Overall, LGBTQ+ consumers are similar to the general population but stand out for their commitment to natural and organic foods. They also tend to be trendier and more tech savvy. The marketing landscape for the LGBTQ+ community is rapidly evolving as more and more retailers and brands actively target this influential group, but there is plenty of opportunity to win their loyalty.

In Part 2, we’ll discuss what types of brands and categories LGBTQ+ consumers are buying, from Spirits to QSR to Electronics, and what this data can tell you about future shopping behavior.
--