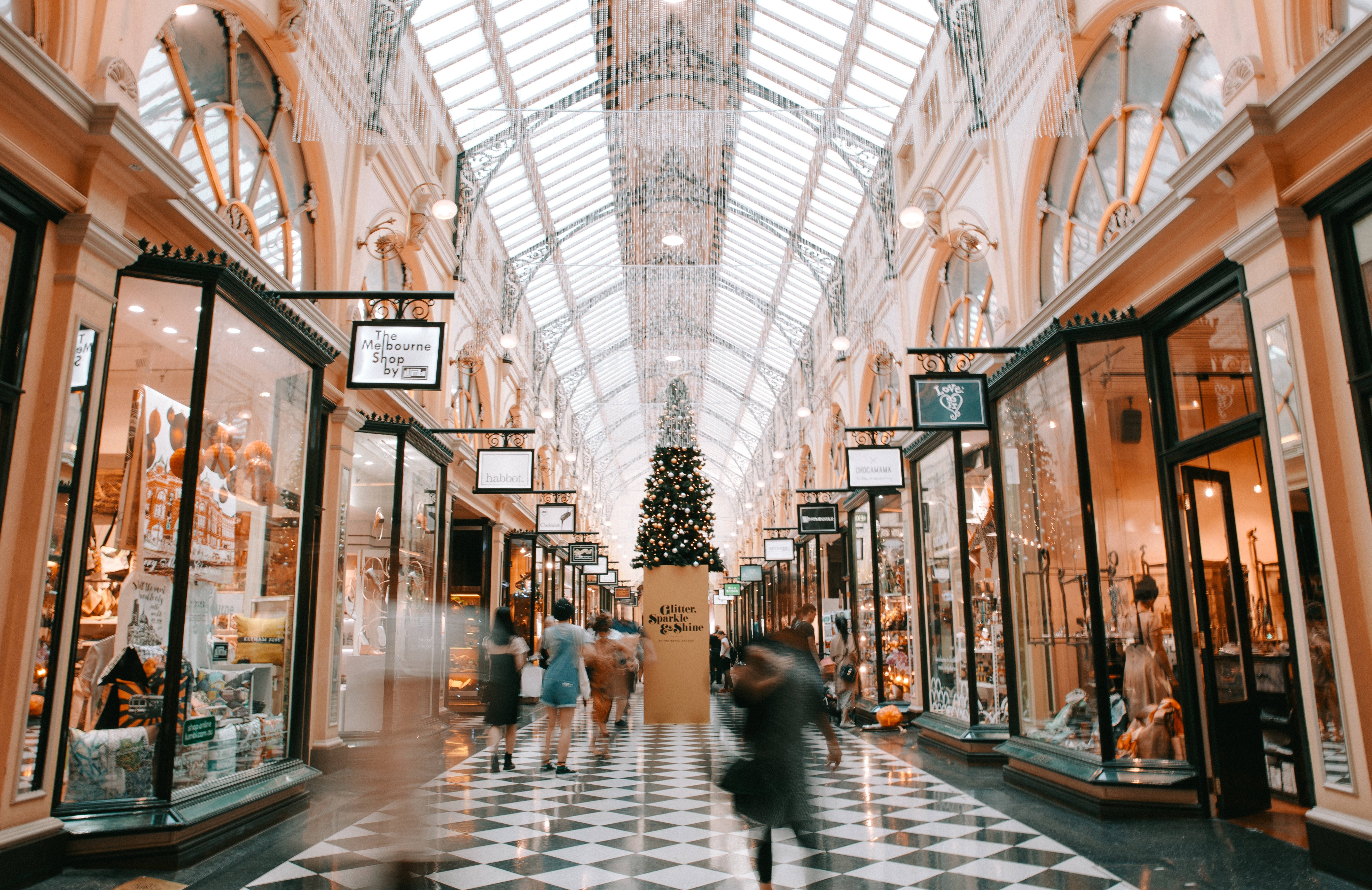 This year, retailers walked a fine line between shoppers’ growing impatience with the inconveniences of Black Friday and their love for a good deal.

The death of Black Friday has been heralded in the media for a long time. Over the past 2-3 years, negative coverage and sentiment has proliferated – some of it tied to the interruption of the Thanksgiving family holiday, while others have criticized the store experience as less than consumer-friendly (other than the deals). Even this year, though the season was widely projected to see record sales thanks to rising consumer confidence in a solid economy, there was still an air of doubt.

It’s true that shopper sentiment is changing. The obvious consumerism of the day coupled with the high-stress atmosphere has led shoppers to change their habits. But retailers are learning to artfully walk the line between consumers’ irritation with the day and their love of a bargain. So yes, Black Friday as we used to know it is gone – but it’s still alive and kicking. It just looks a lot different than it used to.

Giving shoppers more of what they want…

The new Black Friday is more customer-friendly, with better store opening times, fewer restrictions on deals and the flexibility to shop in multiple ways. On top of those additional conveniences, retailers offered even deeper discounts than last year. Numerator data shows that Black Friday deals on popular gifting categories improved in 2018: 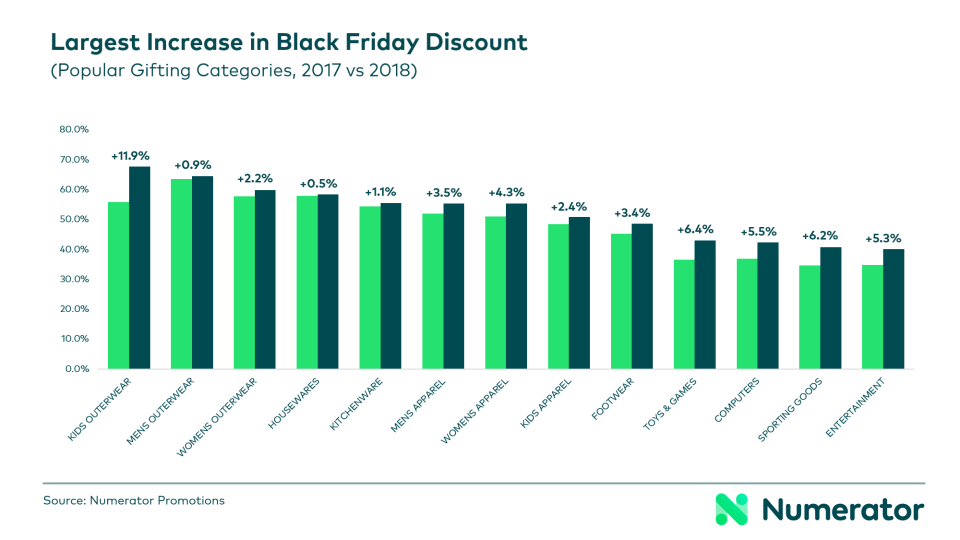 Despite the trend away from Black Friday as the most important individual shopping day of the season, retailers are still offering deep discounts during the holiday. Overall, deals were 49.6% off on average this year compared to 45.5% last year. Why? Well, the deals are the part of Black Friday that, historically, have been working. Consumers like saving money, and always will. They just want the deals without the hassle that traditionally has been involved.

…And less of what they don’t want 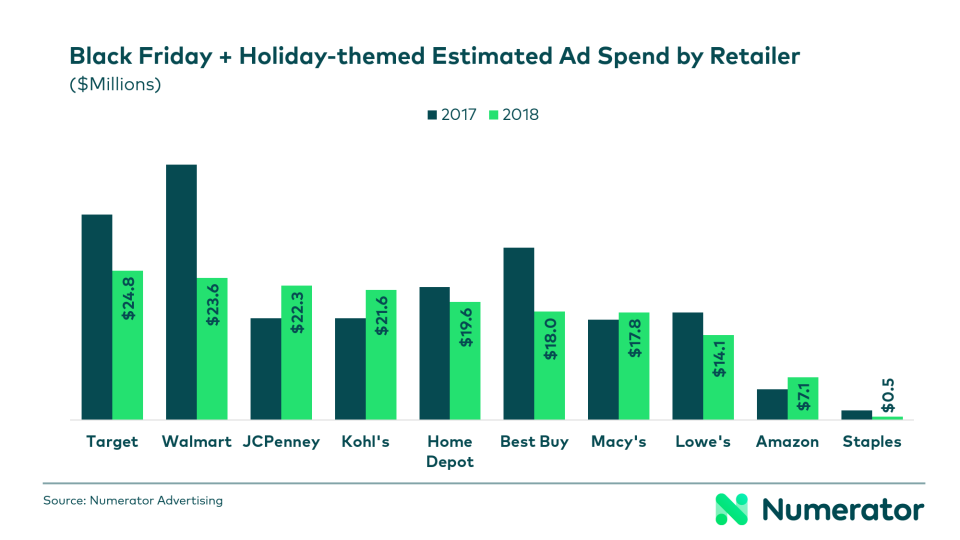 A couple of trends may be impacting this strategy shift. We’ve talked about consumers shopping on their own terms these days, and according to a survey of Numerator’s InfoScout OmniPanel™, that includes holiday shopping. Consumers have spread out their holiday shopping to the extent that retailers would do well to consider holiday shopping as a year-round season. 37% of survey respondents started their Christmas gift shopping BEFORE October. Certainly, the emergence of Prime Day and various Black Friday in July events have given shoppers promotional incentive to start their holiday shopping earlier, but the convenience of online shopping—allowing shoppers to convert with a couple of clicks—puts them in an “always-on” buy-state that has enabled year-round holiday shopping. This new reality may have retailers reconsidering their level of investment in holiday-themed advertising, specifically in October and early November.

Shopper exhaustion with Black Friday may also play a role in the shift in ad messaging. Beyond just the restrictive store hours and huge crowds, consumers have been inundated with advertising and promotional messaging around Black Friday for over a decade, and at this point are well-aware of the promises of Black Friday sales. The shift in ad investment aligns well with the shopper-friendly adjustments retailers have made to their in-store events.

We can safely say that Cyber Monday's profile has risen to the same level as Black Friday, and has yet to experience the same consumer kick-back. You can point to a variety of reasons why this makes sense. People are shopping online more. Cyber Monday doesn't require a crowded store visit. Cyber Monday opens the sale event to thousands of pureplay ecommerce merchants.

You can also point to pricing. Online toy shoppers, for example, saw lower prices on average on Cyber Monday than they did online on Black Friday. On November 1st, Amazon launched a print Toy Book, much like Toys 'R' Us and Walmart had each year prior to the holiday shopping season. Numerator tracked online pricing on Amazon for the 380 toys they advertised in their Toy Book, and found prices to be 4% lower on Cyber Monday than on Black Friday, on average. 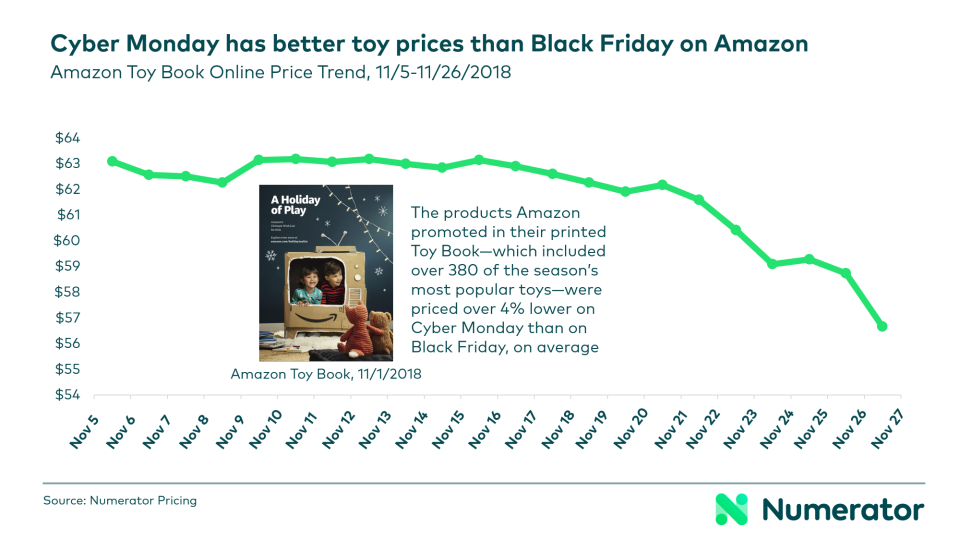 Yes, there are still great deals to be had in-store on Black Friday, but for those willing to buy online, the price gap between Black Friday and Cyber Monday has, in most cases, either evaporated or reversed.

Black Friday is still an incredibly important event for retailers, but they are dealing with new realities – impatience with the inconveniences of shopping in-store, people shopping throughout the year, and the growing importance of ecommerce, to name a few. Those that are able shift elements of their holiday strategy to align more closely with the consumer are much more likely to be successful this holiday season. To hone your holiday strategy, be sure to check out our Holiday Hub for more analysis of holiday purchase behaviors, competitive promotions and pricing, and omnichannel holiday path and purchase data.