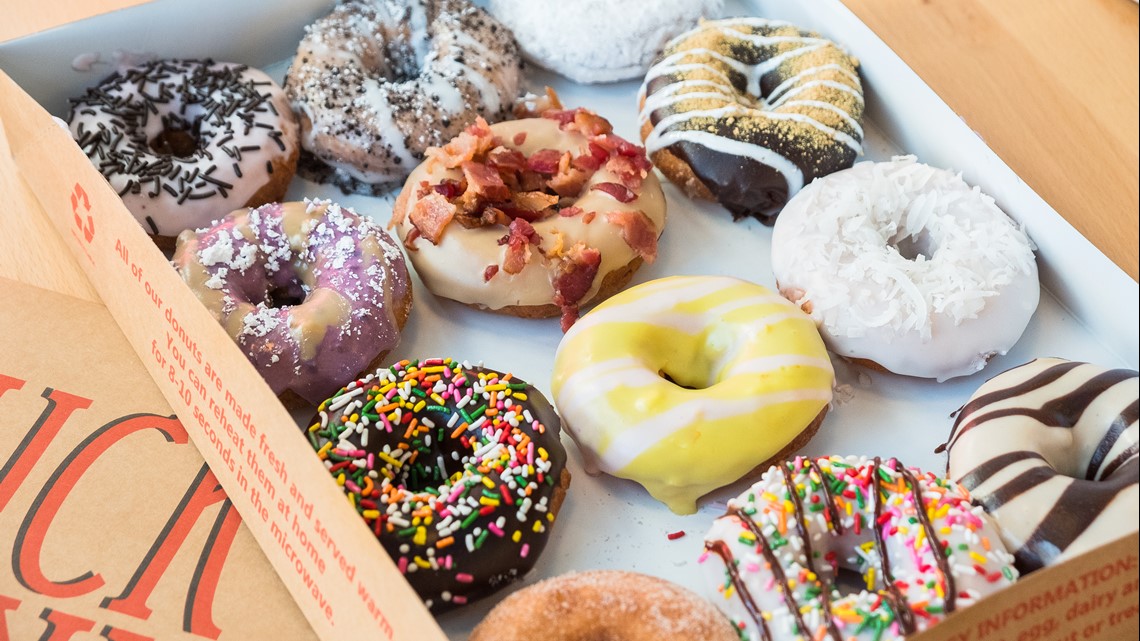 Everyone knows the big names in the quick-service restaurant (QSR) category like McDonald’s, Chick-Fil-A, Taco Bell or Little Caesars, but there’s a new wave of emerging local and regional QSR chains that are growing in popularity— sometimes at the expense of their larger, more established counterparts. Who are these newcomers and how are they doing it? We dug into the data to investigate.

According to Numerator Insights data, three areas in particular are experiencing major growth within QSR: pizza, donuts, and smoothies & drinks. But restaurants in these spaces are not following the conventional QSR model which focuses on price and convenience. Instead, emerging chains are responding to customer demand for quality, healthy ingredients, the ability to customize, and the “new” factor that Millennials love.

When it comes to sweet breakfasts treats, national powerhouses like Dunkin, Cinnabon and Krispy Kreme are being challenged by a group of up-and-comers like Yum Yum Donuts, Duck Donuts, and Shipley Do-Nuts– all of which were up double-digits on trips in 2018.

Much of the success among emerging chains in the donut space is the result of minimal geographic overlap, as all three of these high-growth chains are largely regional. 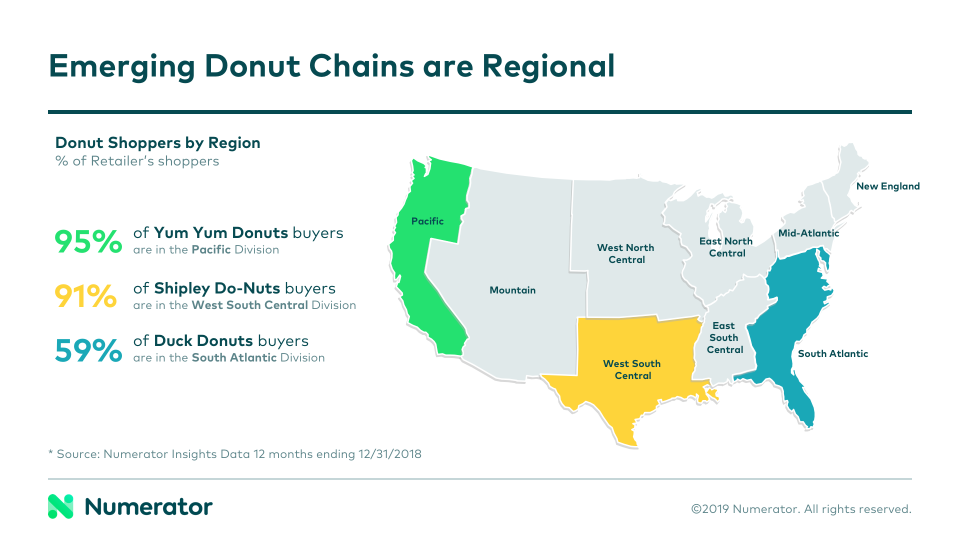 Beyond regionality, customization and convenience appear to be driving forces behind these chains’ growth. In a recent Numerator survey, where we asked QSR buyers their primary reason for visiting a specific restaurant, five times as many Duck Donuts buyers cited "customizable options" compared to buyers at the benchmark chains (Dunkin, Krispy Kreme, Cinnabon). And 44% of buyers said they chose Shipley and Yum Yum primarily because they were "eating on-the-go," compared to 26% for benchmark chains.

Maybe Kramer was truly visionary during an episode of Seinfeld when he shared his idea of opening a pizza restaurant where you could make your own pie. That was almost 30 years ago (!), but new chains in the “build-your-own-pizza” space are finally creating a new kind of competition for traditional chains.

In fact, projected trips for Mod Pizza and Blaze Pizza, which stole a few pages from the Chipotle and Subway playbook by offering customizable options, jumped by about 30% in 2018. Similar to the donut chains, these emerging pizza joints don’t have much overlap, as only about one-third of Mod buyers are aware of Blaze and vice versa, according to a Numerator survey. Among the buyers of their benchmark competitors - Papa John’s, Domino’s, Pizza Hut and Little Caesars – awareness of Blaze or Mod is low, at about 20%, but nonetheless, the chains’ growth is undeniable.

Blaze Pizza is also on the healthy food train, promising pizza made from fresh dough and clean ingredients, with no artificial colors, flavors, preservatives, chemicals or additives. Not coincidentally, Blaze and Mod buyers are more willing to pay a slight premium for organic ingredients than total QSR/fast casual buyers (16% and 17.5% respectively vs. 12%).

Once again, customization seemed to be a key component of these chains’ growth. When asked why they visited Mod Pizza and Blaze Pizza, half of buyers cited customizable meal options  which was three times the benchmark of Papa John’s, Domino’s, Pizza Hut and Little Caesars.

Healthy Smoothies and Drinks Are Feelin’ It

People are paying attention to food labels and gravitating toward healthier options more than ever. At the same time, they don’t want to compromise health for the sake of speed and convenience, which is why smoothies and nutritious drinks have become so popular.

Jamba Juice (recently rebranded to just “Jamba”), Smoothie King, and Kung Fu Tea are all projected to see double-digit increases in trips, collectively up 30% year over year, according to Numerator Insights data. Combined, they have just 0.6% share of QSR trips nationally and awareness is relatively low across the country, but this small customer base is expected to see significant growth.

All three chains are going after a younger consumer segment than traditional QSR/fast casual chains, pulling in Gen Z and Millennial consumers at 1.4x to 2.6x the national average. 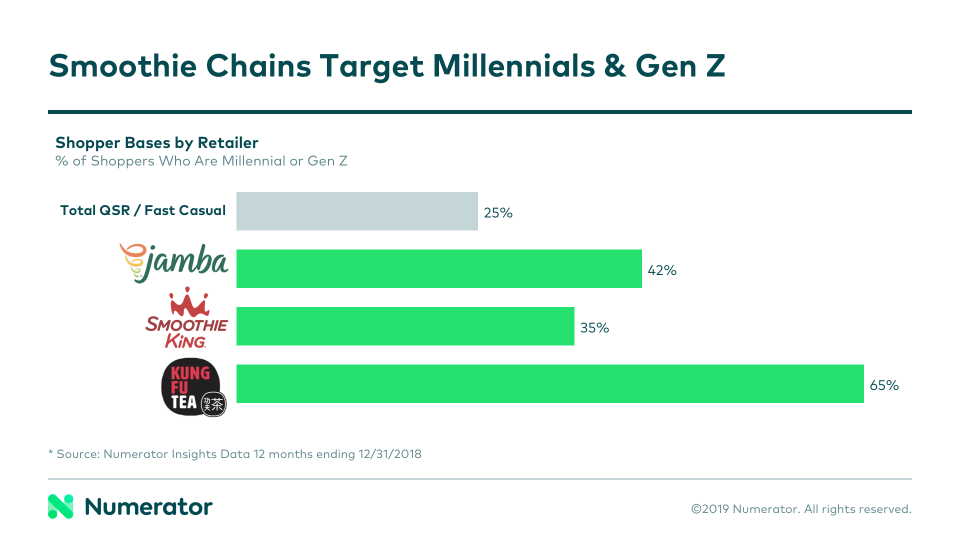 Despite targeting similar demographics, these three chains are growing because they’re able to serve distinct geographical regions, without competing directly with each other or the larger, national players. Additionally, Kung Fu Tea distinguishes itself from Jamba and Smoothie King by serving a wider variety of beverages and desserts, such as tea, slush, snow cream, and yogurt drinks.

A significant advantage for these three emerging chains, according to Numerator Psychographics data, is that buyers are more willing to pay more for organic items than QSR/fast casual buyers in general. When asked why they visited Jamba and Smoothie King, 30% of Numerator Survey respondents cited fresh/organic ingredients – 10 times the number for the benchmark of McDonald’s and Starbucks buyers.

The national benchmark brands will always own a large consumer segment due to price and convenience. However, even with far fewer locations and lower awareness levels, these emerging brands are capturing more and more trips within niche consumer segments. While healthy eating is still trending upward, there’s still room for new brands that cater to our desire to indulge. And we’ve learned that the Subway-Chipotle model can be applied to all types of foods, including pizza and donuts.

These emerging chains have also managed to grow alongside each other without running into too much competition by serving different markets. We’re interested to follow along as they continue to grow, and to see how these chains fare if they venture to expand into overlapping territories.

If you’d like to learn how new QSR chains could potentially impact your brand and how to implement strategies that allow you to retain more customers, reach out to our team and we’ll dive into the data together!