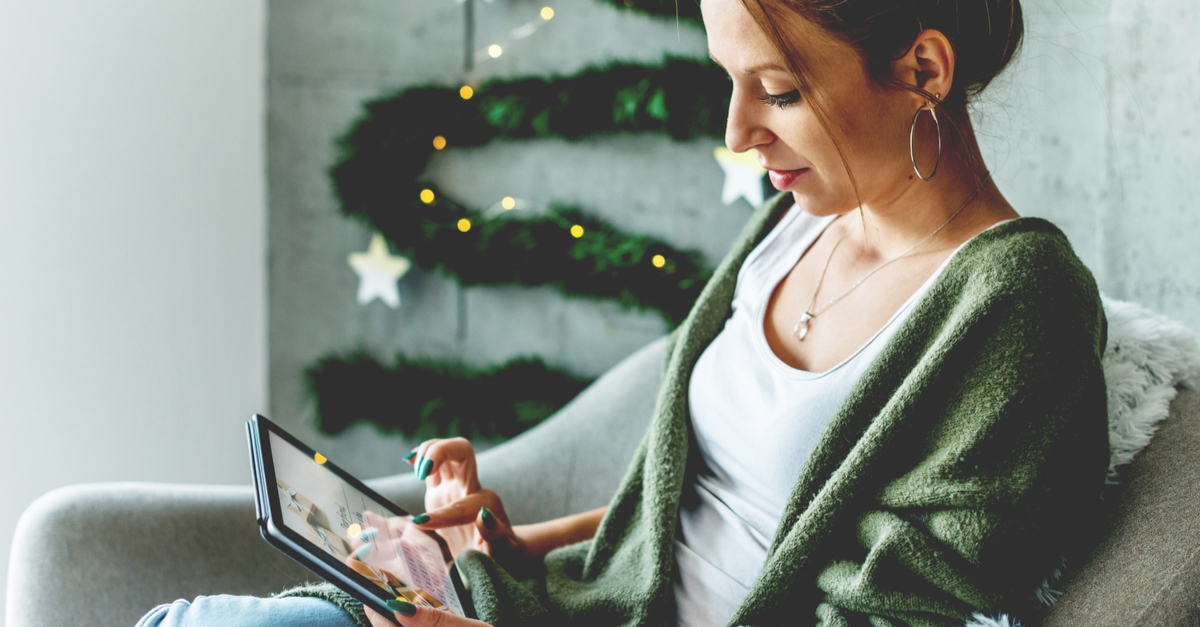 This past weekend, consumers across the country flocked to retailers— and e-tailers— to take advantage of epic holiday deals. What began decades ago as a single day of in-store consumer chaos has expanded to a full weekend of doorbusters and discounts across all of online and offline retail.

Cyber Monday may not be the new Black Friday, but “Cyber Weekend” is the new everything. Consumers and brands alike are leaning into the online aspect of holiday shopping, which is hardly a surprise given the rise of online shopping in general. With the increasing emphasis on e-tail, we wanted to not only examine overall Cyber Weekend trends, but also dig into the habits of the quintessential cyber-shoppers: Amazon Prime members.

In a survey of over 10,000 shoppers who submitted receipts between Thanksgiving and Cyber Monday, Numerator found a number of distinguishing factors between Prime members and non-members in terms of how they planned for, shopped, and fared this Cyber Weekend.

86.2% of shoppers this past weekend knew they intended to shop well in advance of Cyber Weekend’s kickoff; the majority decided at least a week prior, with many deciding with a few weeks to spare. There wasn’t a significant difference between the percentage of Prime members and non-members who planned ahead to shop, but members were slightly more likely to be a bit spontaneous, with 34% deciding only days before, rather than a week-plus.

When it came to researching deals and discounts, many shoppers (54.3%) took a look at specific retailers’ websites, some Googled deals (32.6%), and others scrolled social media (23.3%). Shoppers were more likely to browse digital ads and circulars than physical ones, but only slightly so (45.1% vs. 40.3%). Amazon Prime members were more active researching deals across all mediums. 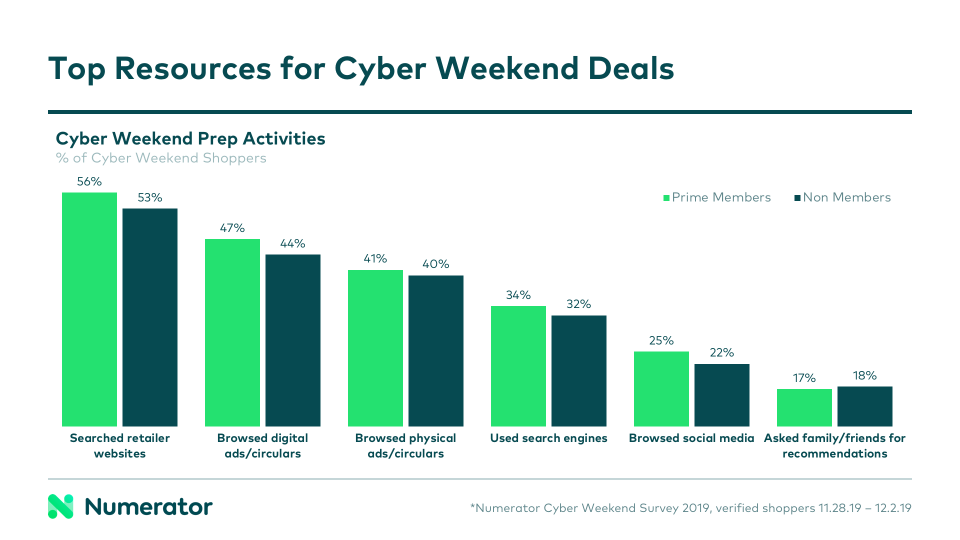 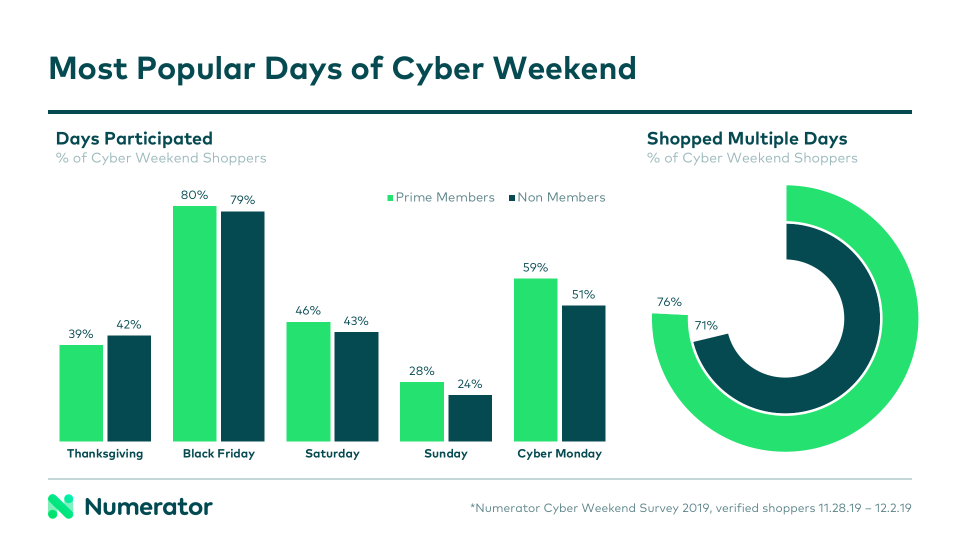 As one might expect, Prime members were far more likely to shop online than non-members; 41.3% did all or most of their shopping online, compared to 28.7% of non-members. More than half of consumers (68.3%) shopped a mixture of in-store and online last weekend, while 18.1% shopped exclusively in-store and 13.6% shopped exclusively online. Prime membership corresponded to a higher likelihood of online shopping, but an even better predictor of online shopping was spontaneity; individuals who decided day-of to participate in shopping were twice as likely to make their purchases entirely online.

Most shoppers (70.7%) stuck to stores and websites they typically shop at for their Cyber Weekend purchases, but some did venture to new stores (10.5%) or websites (16.1%) as well. 90.6% of shoppers made purchases at at least two different retailers over Cyber Weekend. All but 7% of Prime members who shopped over the weekend made a purchase at Amazon, and 90.8% of those shoppers made additional purchases at other retailers. Despite a wide assortment of offerings, Amazon was not the be-all end-all, even for Prime members.

Cyber Weekend was not the time for routine shopping trips. 100% of surveyed shoppers participated in holiday sales, and identified their trips as holiday-oriented, rather than routine trips they’d have made regardless of sales and promotions. Overall, the distribution of those shopping for themselves vs. shopping for gifts for others was evenly distributed, with most doing a little of both. Prime members were slightly more likely to be buying gifts for others.

Coming off of Cyber Weekend, 27.2% of shoppers said they purchased exactly what they planned to. An even larger group— 38.5%— purchased everything they planned to and more. After a successful weekend of shopping, 57.2% indicated they were mostly or completely done with their gift shopping for the holiday season, and another 25% said they were half-way done. There were no significant differences between Prime members and non-members 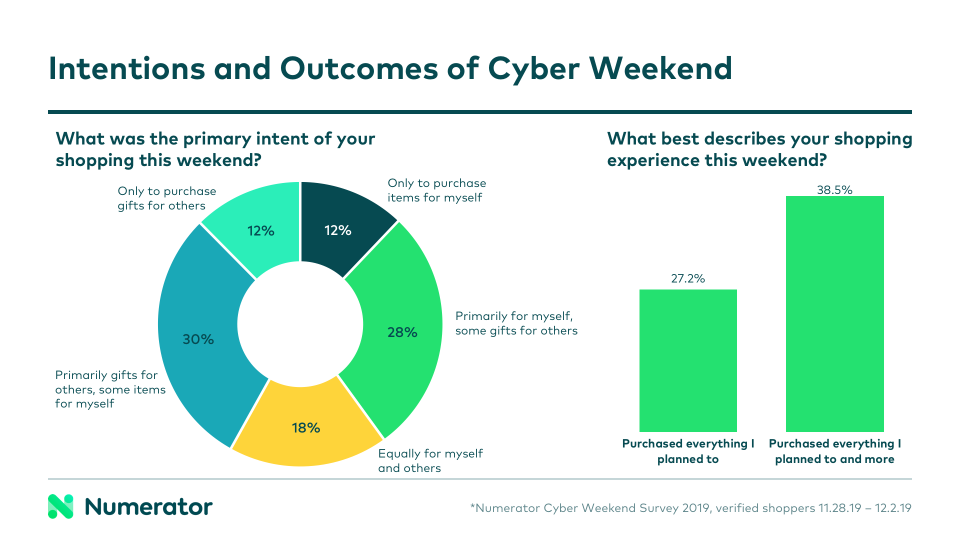 Cyber Weekend has come and gone, but holiday spending will continue to ramp up as Christmas approaches. Brands and retailers can learn a lot from how consumers behaved this past weekend. Online may be increasingly important, but even for Prime members— Amazon’s most loyal consumers— in-store shopping is still relevant this holiday season. For more holiday insights, give us a jingle today.