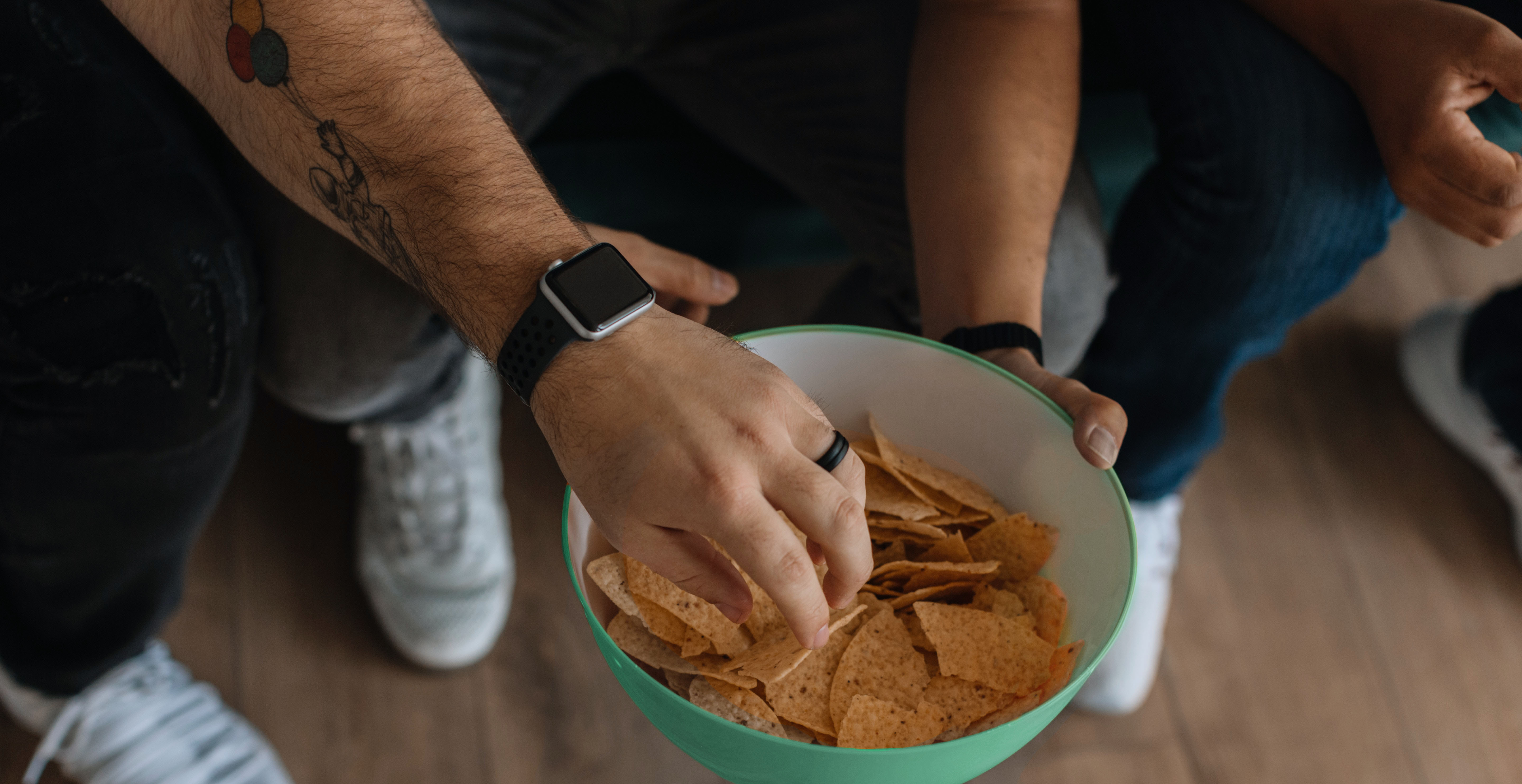 Super Bowl LIV is just around the corner, and with the big game comes big sales, especially for grocery. The pressure is on as brands face-off for the title. Looking to years past, which brands have been top contenders, and who might win big this year?

In 2019, the day before the Super Bowl was the highest single day of grocery sales all year. Consumers went all out for the big game, and as one might expect, snack brands and brands selling typical “party foods” reaped the benefits. The chip, beer and frozen pizza categories saw some of the biggest spikes the week of the Super Bowl versus the week prior. Within these categories, which brands brought their A-game and played to win?

Chips: A Tried and True Champion

Though Lays and Doritos captured the most sales in the week leading up to the 2019 Super Bowl, Tostitos was the brand with the most significant Super Bowl boost, with their share jumping from 7.9% the week before the Super Bowl to 12.4% the week of. This 1.6x bump in share has been consistent every year since 2017, establishing Tostitos as the reigning champion of Super Bowl chips. To add even more to celebrate, Tostitos dips also receive the biggest boost of any dip brands the week of the Super Bowl. 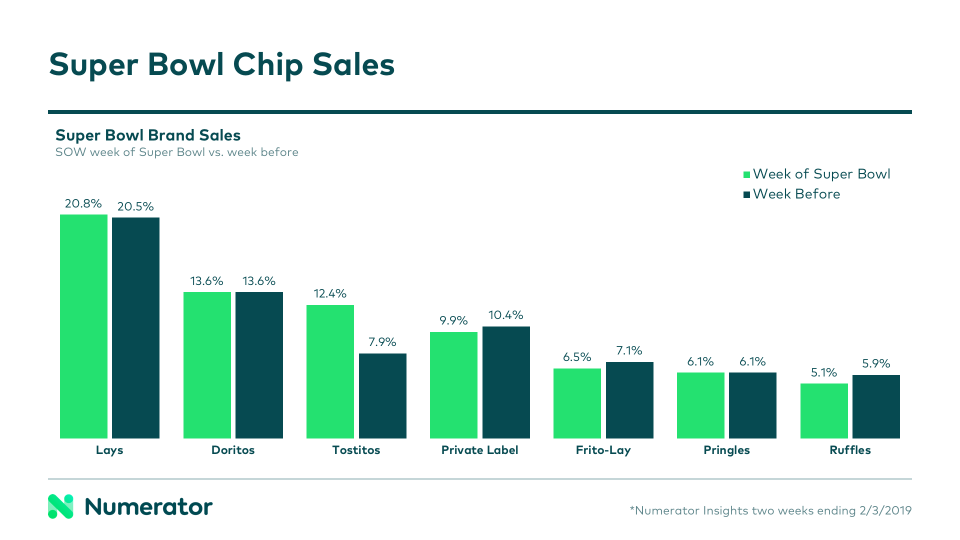 Beer: The Rise of an Underdog

When it comes to beer, Bud Light has thus far held off the competition, but their share of sales in the week leading up to the Super Bowl has been steadily decreasing year-over-year, down 2.9% from where it was in 2017. Coors Light followed a similar trend, losing share over the past three years, while Miller Lite and Budweiser saw slight increases. Michelob Ultra has historically been a bit of an underdog, but continues to climb in the ranks faster than any other brand, gaining the most share of any top beer brand between 2017 and 2019. 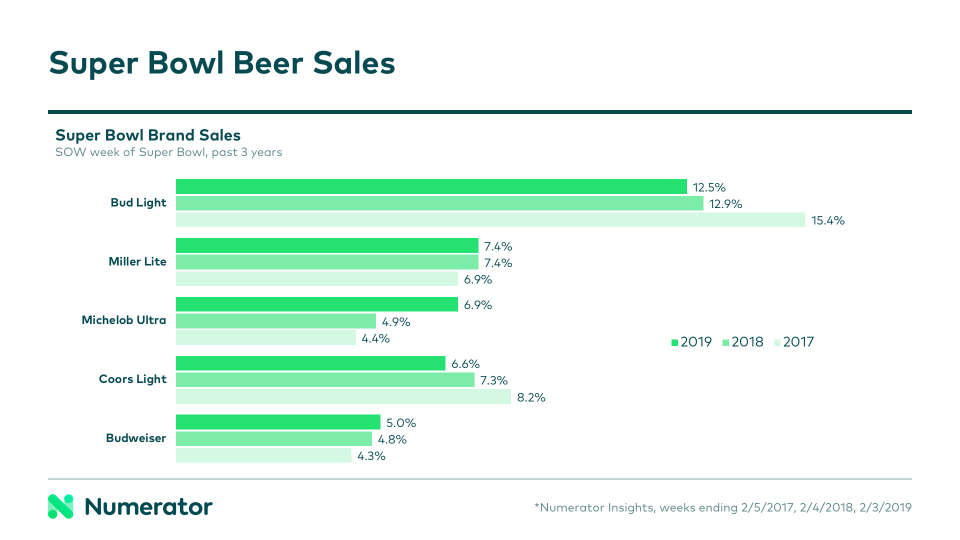 In addition to year-over-year trends, we also saw some brands getting a bump the week of the Super Bowl versus the week prior. This was most pronounced with Corona, Stella Artois, and Blue Moon, which saw 1.3, 1.4, and 1.5x share boosts the week of the Super Bowl. Michelob Ultra and Miller Lite each increased share roughly 1.2x, while Coors Light and Budweiser held steady. Bud Light was the only one of the top beers that saw a slight decrease in share compared to the week before.

Super Bowl sales of frozen pizzas proved slightly less predictable. While the top three players— Digiorno, Red Baron, and private label— haven’t changed over the years, the distribution of their sales certainly has. In 2017 and 2018, Digiorno was the only brand to receive a share boost the week of the Super Bowl, capturing over 40% of frozen pizza sales in each time period. In 2019, however, Red Baron’s share skyrocketed, jumping 1.8x versus the week prior and 2.4x versus the year prior. Red Baron’s advances held off market leader Digiorno, and significantly leveled the playing field. 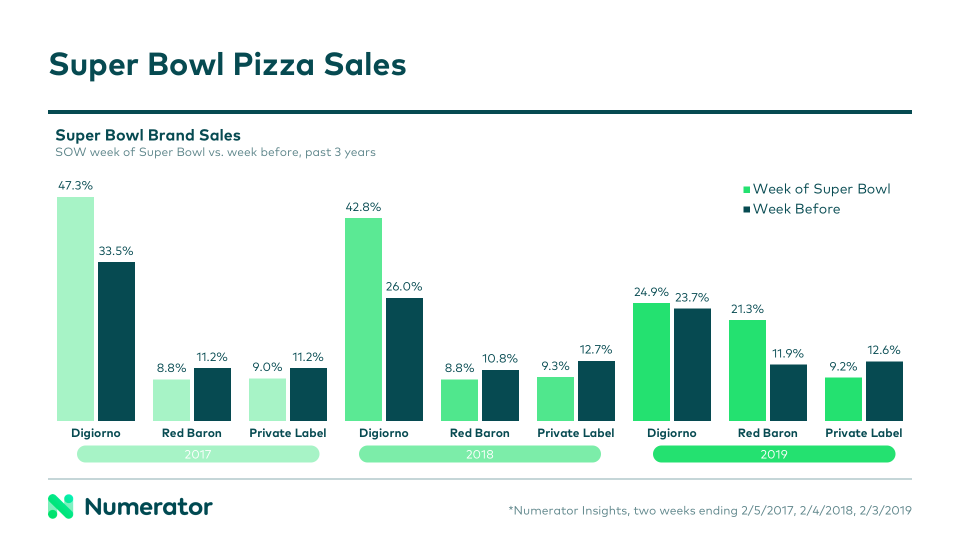 Are you ready to up your insights game? Numerator is here to help you every step of the way, so get off the sidelines and drop us a line.