'Tis the Season for Toy Books 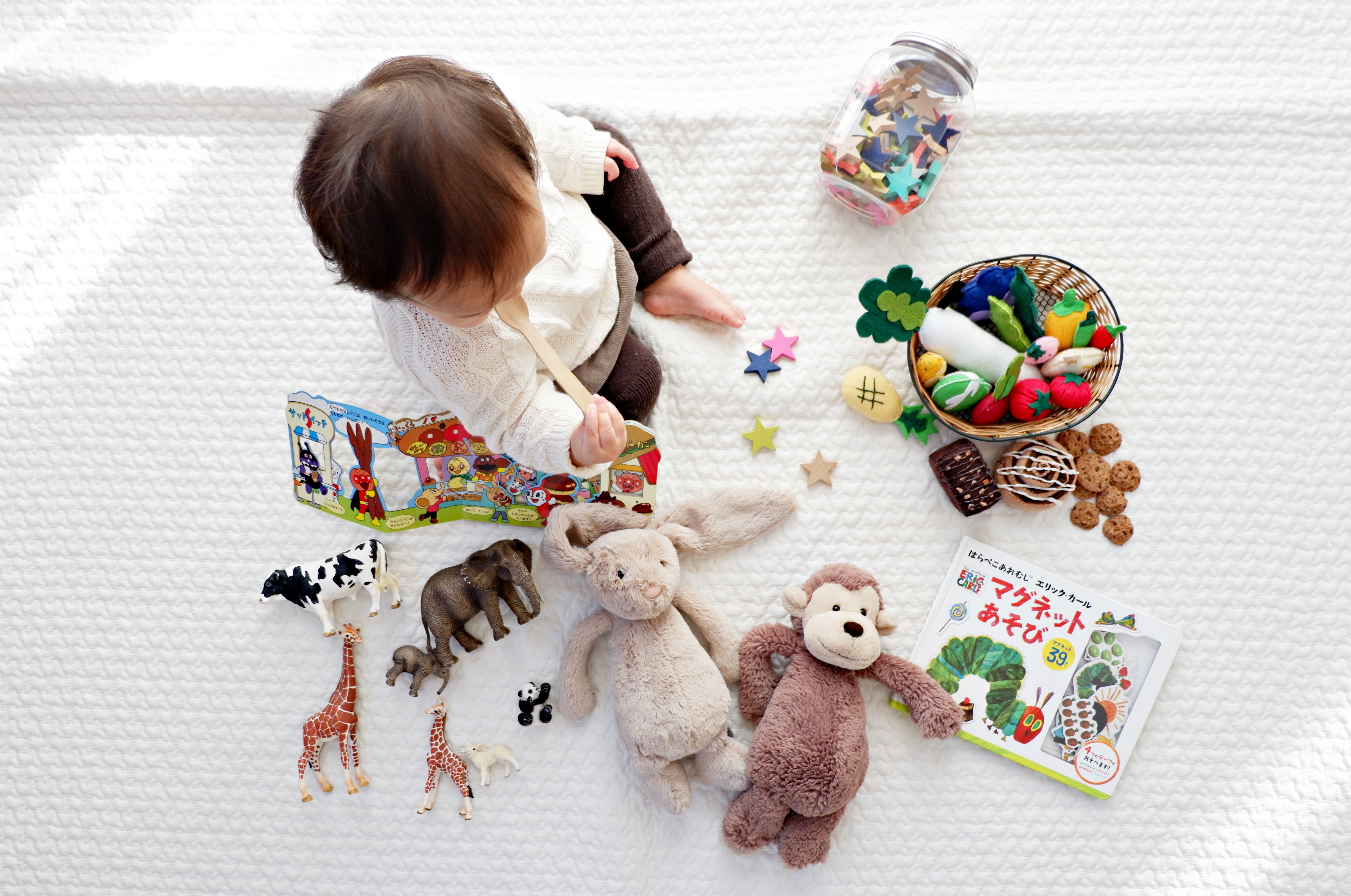 As ecommerce continues to grow and advertising becomes increasingly influenced by digital, it’s hard to see the print catalog as relevant these days. But retailers haven’t written off print just yet. Today, the paper catalog has become primarily a marketing tool— and one of special importance during the holiday season, particularly for those in the toy industry. Because the annual toy book is such a vital tool for driving holiday sales, we've reviewed the 2019 toy books from three major retailers to see how toy book trends might be shifting this year

Print may seem archaic in the age of ecommerce, but the truth is it’s still very relevant, particularly during the holidays. And there is no more important circular for retailers during the holidays than the classic toy book. If there was any doubt about this fact, it was confirmed last year by Amazon when they jumped into the holiday print fray with the release of their first ever print toy book.

According to a survey conducted by Numerator last holiday season , 81% of toy shoppers actively look at store circulars for the best deals on holiday gifts. So having a robust toy book featuring competitive discounts is a great way for retailers to entice shoppers into their stores and increase their share of holiday toy spend. And, as an added bonus, toy shoppers tend to make other holiday purchases while in-store, so luring them in with deals on toys is likely to increase overall holiday sales.

Because of their importance, we’ve reviewed 2019 toy books from Amazon, Target and Walmart to see who is featuring the lowest prices and which brands and categories are receiving the most support from retailers this holiday season.

Target dropped their toy book first, on October 23. Walmart and Amazon waited for November, publishing theirs on November 1 and 4, respectively. Of the three retailers, Walmart put the most emphasis on exclusive toy offers this year, with 37% of products featured in their toy book labelled as “Only at Walmart”— up from 27% in 2018. A smart move, as having exclusive or hard-to-find toys in their holiday toy assortment helps retailers draw holiday shoppers to their stores and websites since those products can’t be found elsewhere. 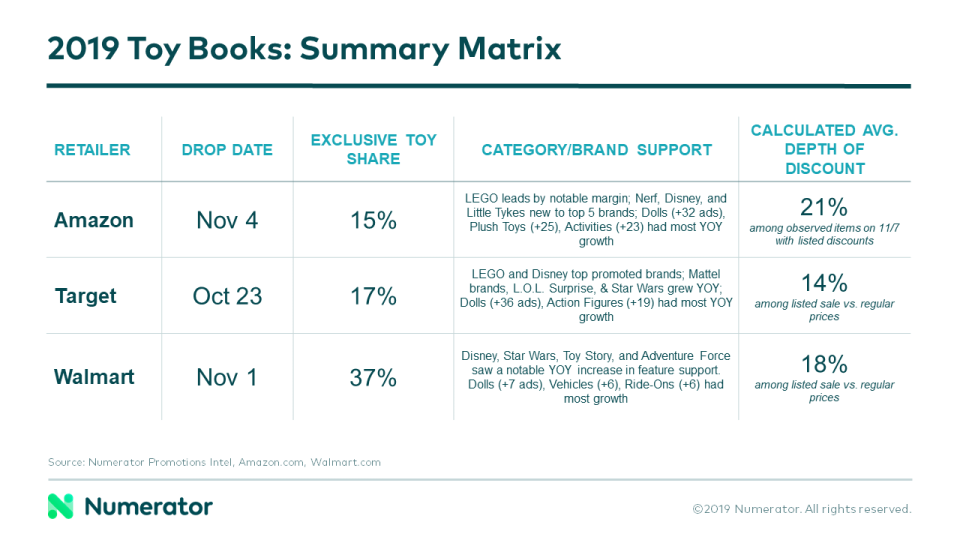 Perhaps unsurprisingly, Amazon offered the deepest discounts on the products featured in their toy book, with an average depth of discount 21% across products. It’s worth noting that although Amazon initially had lower prices on several items that were also included in the Walmart toy book, Numerator analysis shows that Walmart.com almost immediately matched those prices and is now aligned with Amazon on exact-match item prices as of November 7.

Although Amazon won deepest average discount, Walmart had the largest share of toys featured under $15. Nearly half of Target’s toy book featured prices under $20 while Amazon focused more heavily on toys in the $20-$69.99 price range.

*Note: Amazon does not include prices within their toy book. Prices used in this analysis were observed online at Amazon.com on November 7. 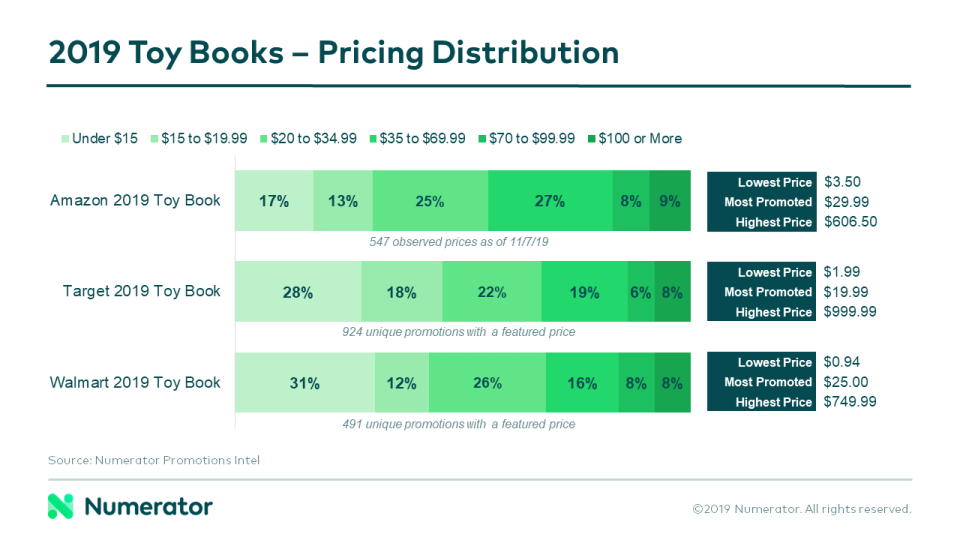 LEGO and Disney were the clear winners for toy book brand share in 2019, as they were among the top 3 promoted brands across all three retailers. At Amazon, LEGO led brand share by a notable margin, while Nerf, Disney, and Little Tykes were new to the top 5 this year compared to 2018. LEGO, Barbie and Disney were the top brands featured by Target, and Mattel brands, L.O.L. Surprise, and Star Wars also saw YOY growth. At Walmart, Disney, Star Wars, Toy Story, and Adventure Force each saw a notable YOY increase in feature support. 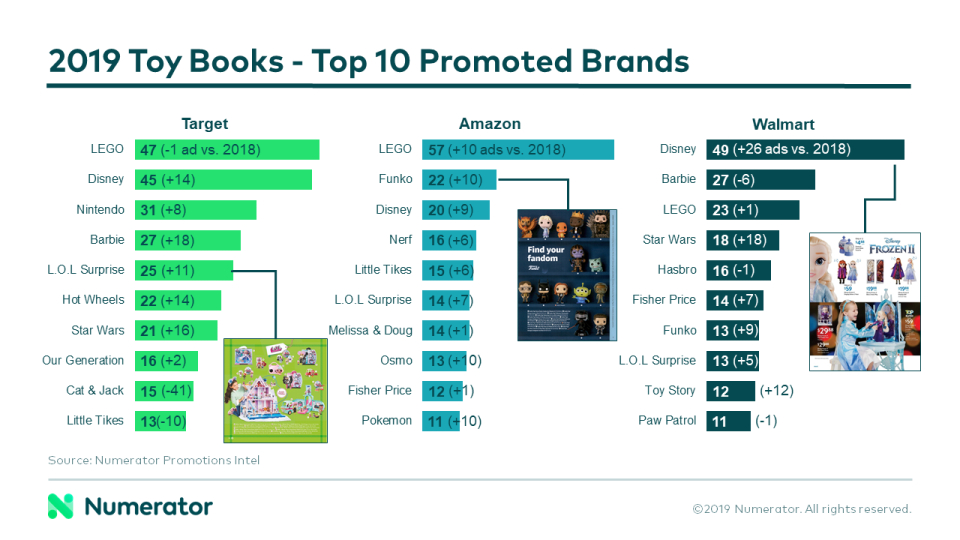 With respect to category share, holiday season 2019 is all about dolls— the category saw the highest YOY increase in support across all three retailers. This increase was driven primarily by both Disney and L.O.L Surprise. Beyond dolls, at Amazon activities (Play-Doh, Crayola, Melissa & Doug) gained the most YOY support, while fewer Playsets/Tracks were featured this year. Star Wars drove Action Figures growth at Target, and e-Learning saw also saw a bump in ads, mostly from LeapFrog, Fisher Price, and V-Tech. Finally, in Walmart’s toy book, vehicles saw more support than last year, while Games and Role Play toys— from brands like Arcade1Up, Disney, and Little Tikes— saw fewer features in 2019. 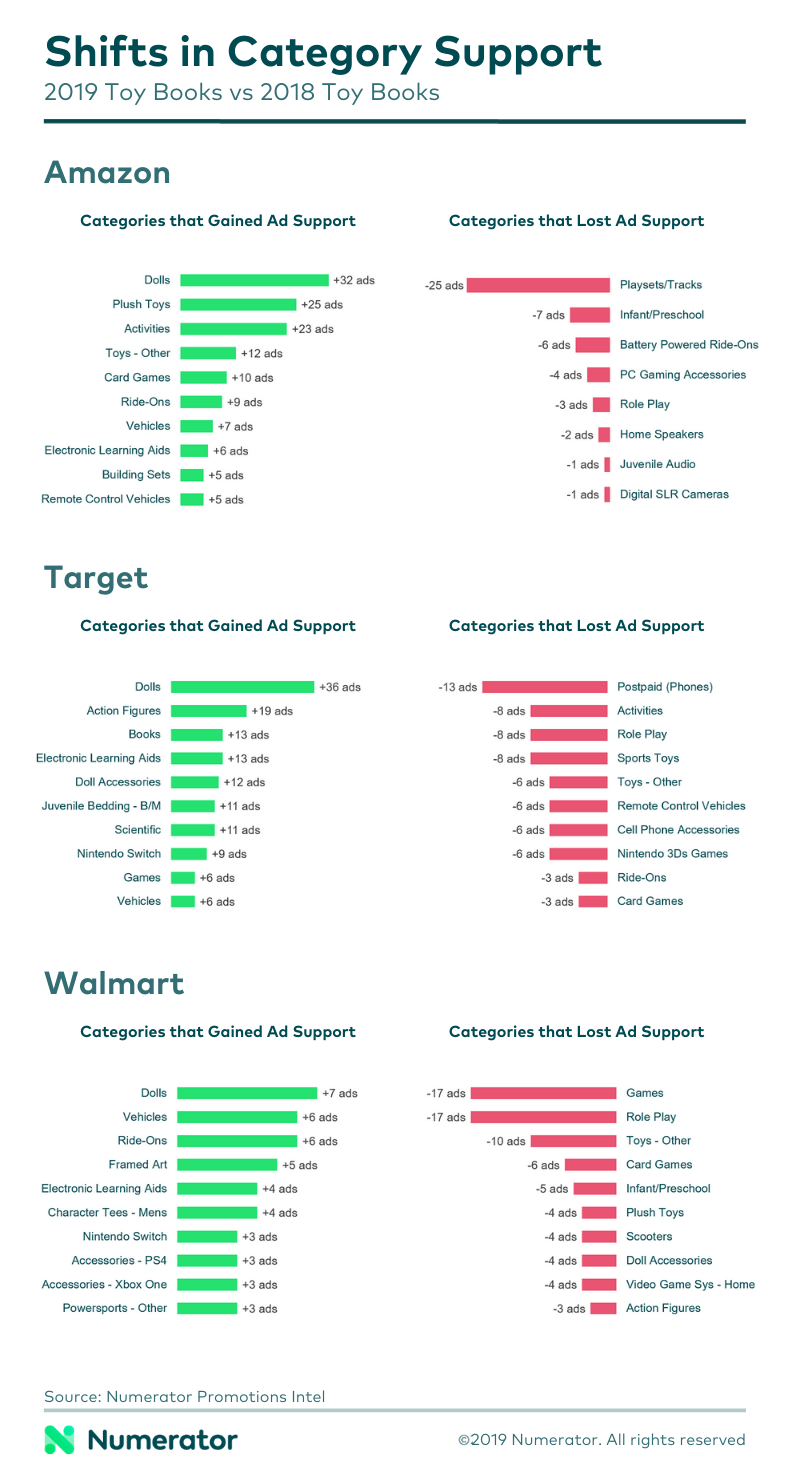 Having a holistic view of promotional activity during the holiday season is vital for better planning and improving end-of-year performance. At Numerator, we provide comprehensive visibility and deeper insight into the competitive cross-media promotional landscape. For more information about a review of holiday promotional trends in your category, reach out to us today!