Memorial Day weekend is quickly approaching, bringing with it the unofficial kick-off to the summer season. It’s a time for warm weather, cool treats, and lots of backyard BBQs. As Americans prepare to fire up their grills, we fired up our insights to better understand the whos and whats of Memorial Day grocery shopping.

Ice cream cones, hot dogs, cocktail mixers and canned beans— classic components of a backyard BBQ— all experienced more than their fair share of sales Memorial Day weekend 2018 compared to the rest of the summer. To venture beyond these predictable sales boosts, we profiled the “Memorial Day Meat Buyer” and broke down grocery baskets throughout Memorial Day weekend.

The Meat of the Matter

One of the most important ingredients for a good cookout is the meat. Last year, 37.7% of households purchased meat between the Friday and Monday of Memorial Day weekend, while 37.3% of households purchased groceries, but no meat. Though the number of households in each group was incredibly close, the meat-buying group spent nearly 3x as much on groceries during this four-day span, driven by larger basket sizes and one additional grocery trip.

Households who purchased meat last Memorial Day were more likely to be homeowners (73%) and to own an outdoor grill (64%), making them great candidates to host a backyard BBQ. They also tended to be older, wealthier, and married with children. 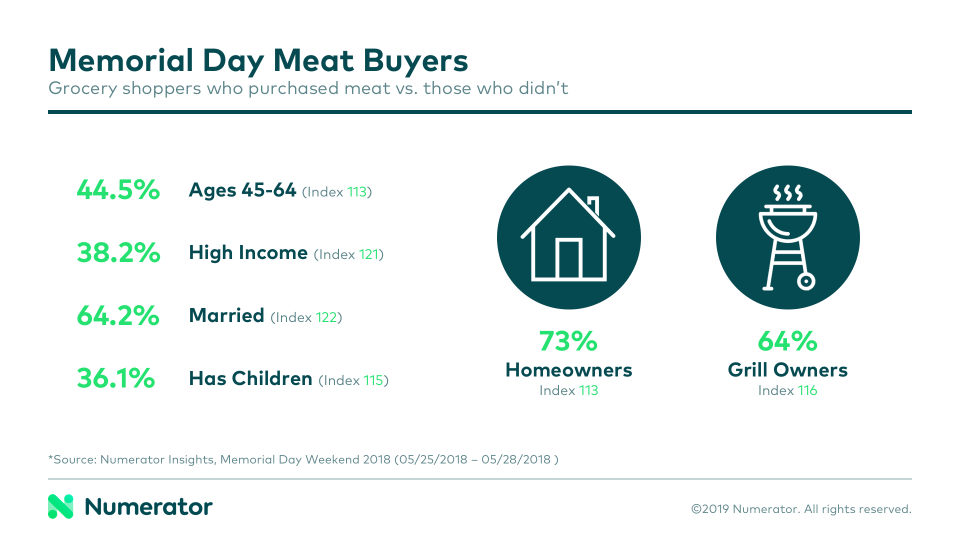 Those buying meat shopped more heavily in the food and club channels, spending 56.4% and 10.9% of their grocery dollars in each channel, respectively, compared to non-meat buyers who spent 47.2% and 10.0%. Individuals who did not purchase meat were more likely to shop in the mass, liquor, gas & convenience or dollar channels; they were also 1.5x more likely to purchase only 1-2 items on their trip, potentially indicating these individuals were grabbing a couple food or drink items on their way to a gathering.

The average grocery basket on Memorial Day weekend last year cost $42.59, but that spending varied significantly based on which categories were included in the haul. For example, baskets that included refrigerated foods were $112 on average, those with condiments rang in around $78, and baskets with snack foods were closer to $63.

Understanding which items are typically purchased together can help inform cross-promotion opportunities and optimal store displays. A basket affinity analysis on top Memorial Day grocery categories revealed exactly what you might expect in terms of product pairings. Affinity winners included cones with ice cream, hot dogs with bread, cold cuts with cheese, and dip with chips. 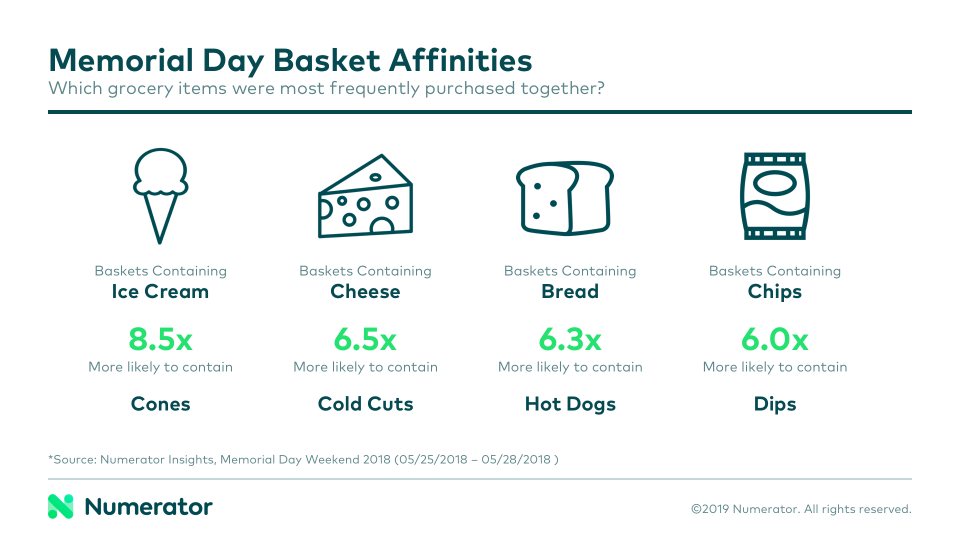 Though all of these affinities held true throughout the year, the percent of trips where both items were purchased was significantly higher on Memorial Day weekend. For example, 15.9% of Memorial Day baskets with bread also contained hot dogs, more than double the 7.2% for the year as a whole. Dips were present in 18.5% of chip baskets (+2.4% vs. full year), cold cuts in 13.3% of cheese baskets (+0.3%) and cones in 1.2% of ice cream baskets (+0.4%).

Enjoy these tasty insights? Subscribe below to receive updates from our blog, including next month’s Summer Grilling Guide where we’ll dive deeper into shopper behavior for top grilling categories, survey consumers on how they shop for summer gatherings and take a look at promotions around key summer holidays.