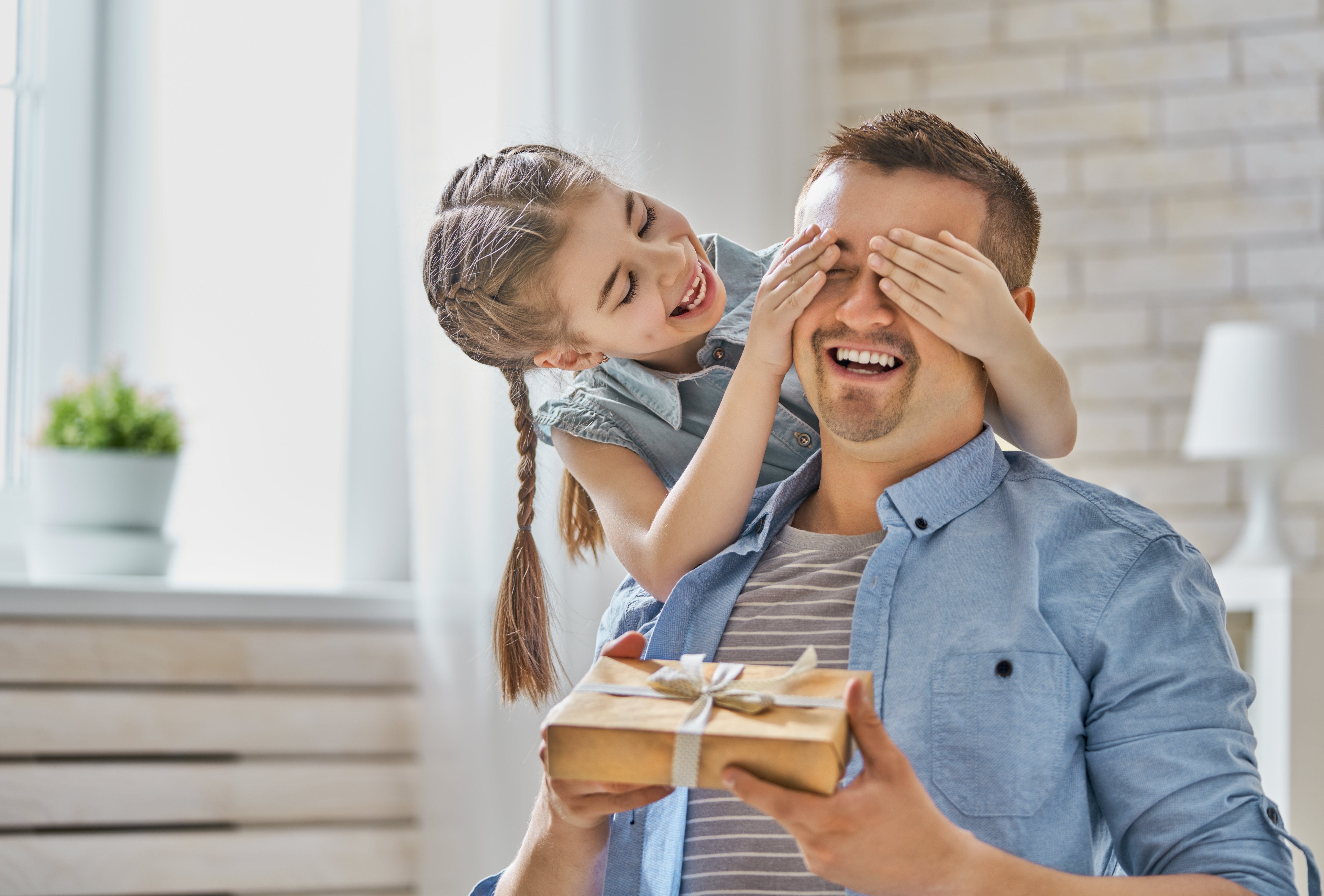 Father's Day is a holiday whose history is deeply entwined with the retail industry. Founded in 1910 by a woman (of course) named Sonora Smart Dodd, the holiday initially was met with disdain from fathers across the nation, who did not appreciate the attempts to “domesticate their manliness” with flowers and gift-giving. It wasn't until the 1930s, when various depression-beleaguered retailers selling men's wares began marketing Father's Day heavily in order to commercialize the day, that the holiday began to gain traction with American men.

This past Sunday marked Father's Day 2019 and it's no wonder, then, that in the weeks prior to the holiday many people prepared to celebrate the dads in their lives by doing the one thing so many dads hate - shopping. After all, every dad is the World’s Greatest Dad to someone, so they deserve to be showered with gifts just as much as mothers do.

According to a May 2019 study from the National Retail Federation, this year Father’s Day spending was expected to reach approximately $16 billion — a record high and a 4.5% increase from last year’s $15.3 billion. With this in mind, we wanted to see if retailers promoted Father’s Day deals any differently, in order to gain a larger share of that anticipated increased spending. We reviewed our Promotions Intel data for the two weeks preceding Father’s Day to see how popular Father’s Day gifting categories like these were promoted in advance of the holiday. What themes did retailers use for the event? Which categories and brands got promoted the most?  How did competitive discounts compare?

There were plenty of Father’s Day themed circulars out there in the two weeks preceding the event. Many featured Father’s Day on the front page, and most had Father’s Day messaging throughout the entire circular. 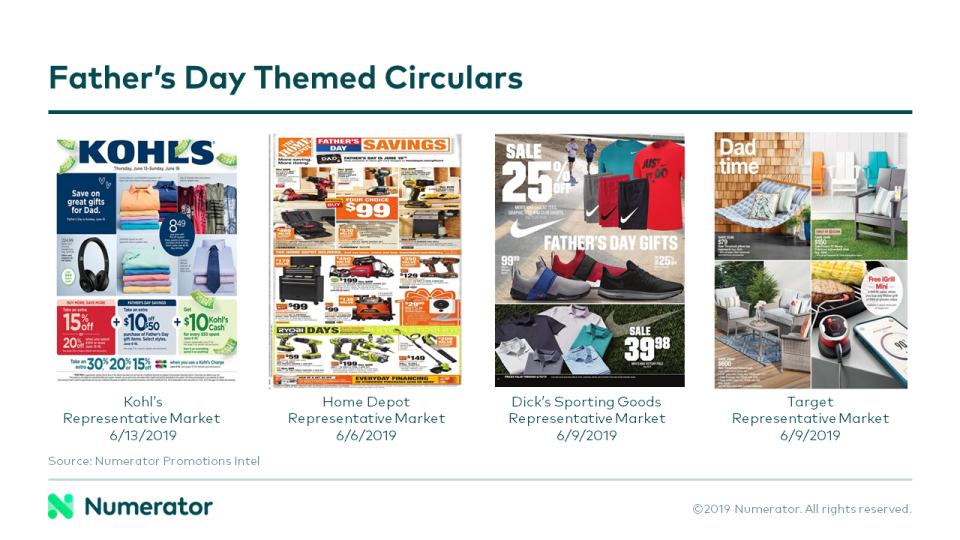 Father’s Day gifting generally trends towards the apparel (the ubiquitous Father’s Day tie!), tech, grills, sporting goods and tools categories. We focused our analysis on these popular gifting categories and found that, similar to 2018, Men’s Apparel was the most promoted category in the two weeks prior to Father’s Day. Surprisingly, computer promotions were up considerably in 2019 when compared to 2018. 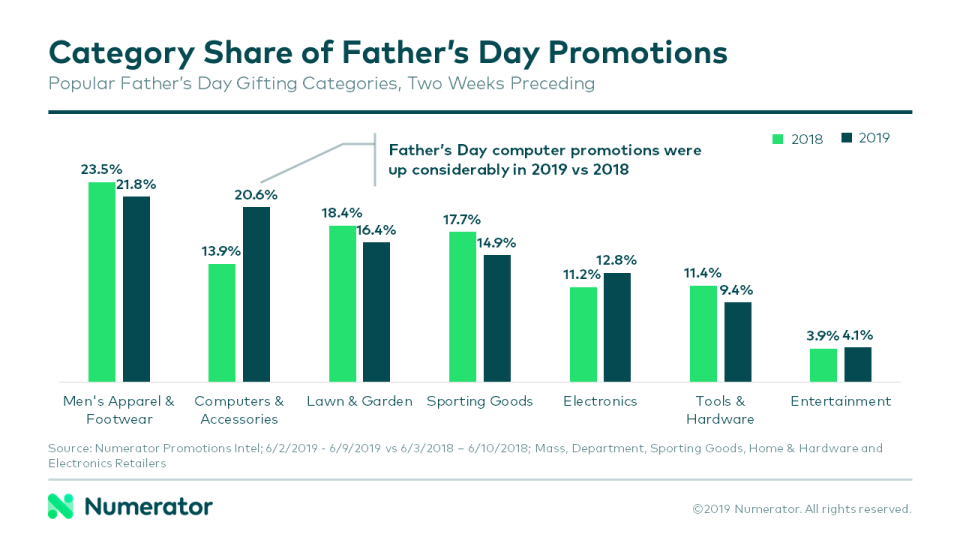 There was little change in overall average depth of discount between 2018 and 2019. Across all categories, retailers offered an average of 31.5% off regular prices during the two weeks prior to Father’s Day this year, compared to 31.2% during the same period last year. At the category level there was very little difference, as well - although some categories did see a slight increase, particularly the Entertainment category (up 5.5% from 2018). Again, Men’s Apparel was the winner, with the deepest average discount.

We also reviewed top promoted brands for a few key Father’s Day gifting items commonly purchased for the event. When it comes to the golfing category, Callaway and TaylorMade led with the most promotional share (18.5% each). When looking at all the grill promotions, the brand most promoted during the week leading up to Dad’s Day are from Char-Broil (with 21.6% share). And the last category we looked at for brand share was Athletic Apparel - with Nike leading the pack at 16.2% promotional share. It looks like sons and daughters had plenty of options to get a great deal on Dad’s favorite items. 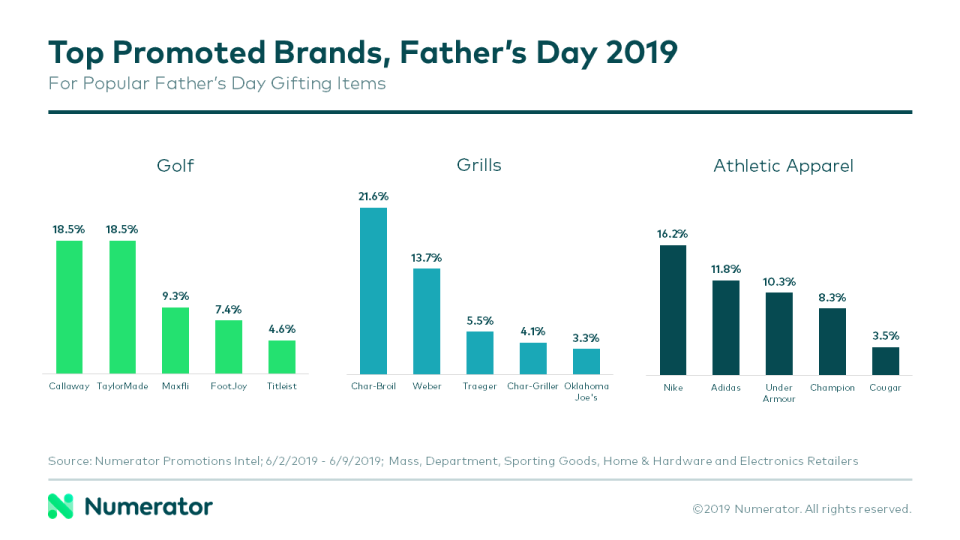 Having a holistic view of your competitor's promotions during seasonal shopping events is vital for better planning and improving performance. At Numerator, we provide comprehensive visibility and deeper insight into the competitive cross-media promotional landscape. Reach out to us at hello@numerator.com today!