The Fall of Pumpkin Spice

Spoiler alert: this is not a post about the demise of pumpkin spice. In fact, it’s quite the opposite– the pumpkin spice frenzy is alive and well, and across industries, marketers and product teams are leaning in to one of the most buzz-worthy topics of the season. As we see more and more companies hopping onto the pumpkin spice bandwagon, we thought it was only fitting to declare this autumn, “The Fall of Pumpkin Spice.”

What started out as a simple seasoning has evolved into a fall phenomenon, impacting everything from coffee to home goods to SPAM (yeah, we were shocked too). Who are the key players in the pumpkin spice game, how are they advertising their fall lineups, and what types of shoppers are they attracting?

The Pumpkin Spice Latte (PSL) from Starbucks has become one of the most iconic pumpkin spice products in the market since its introduction in the early 2000’s. In the spirit of the season, we conducted a survey earlier this week of nearly 1,000 verified Starbucks shoppers to get their thoughts on seasonal drinks like the PSL. Numerator found that roughly one-in-five Starbucks shoppers were aware of the seasonal drinks currently available at the coffee chain; 90% of those individuals gave some variation of pumpkin spice when asked to name one such drink. Pretty great brand awareness, if you ask us.

All surveyed shoppers had made a purchase at Starbucks within the past 52 weeks, and 84.6% of them shared that they’d purchased at least one seasonal drink. The PSL lead the pack with 50.4%, and 17.8% had tried the new 2019 Pumpkin Cream Cold Brew. 48.2% of shoppers indicated they had already purchased at least one seasonal drink this fall, and another 37.2% said they planned to get one at some point in the next few months. 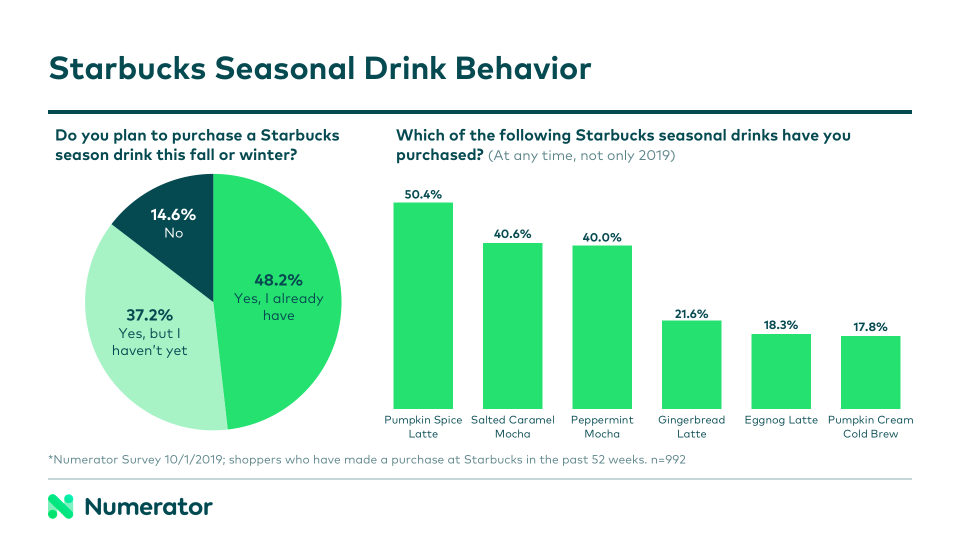 Starbucks was the first to launch their pumpkin spice ads this year, kicking off their digital, mobile, and social campaigns in late August. According to Numerator Ad Intel data, as of October 1st, Starbucks had spent the most on pumpkin spice themed advertisements, and had already surpassed the amount they’d spent in 2018 on pumpkin spice ads. This heavy 2019 spending was largely influenced by print ads in magazines like Food Network, Parents, and People, which were not part of their ad strategy last year. Other big spenders included International Delight which opted for TV ads and Tim Hortons which focused on a radio strategy. 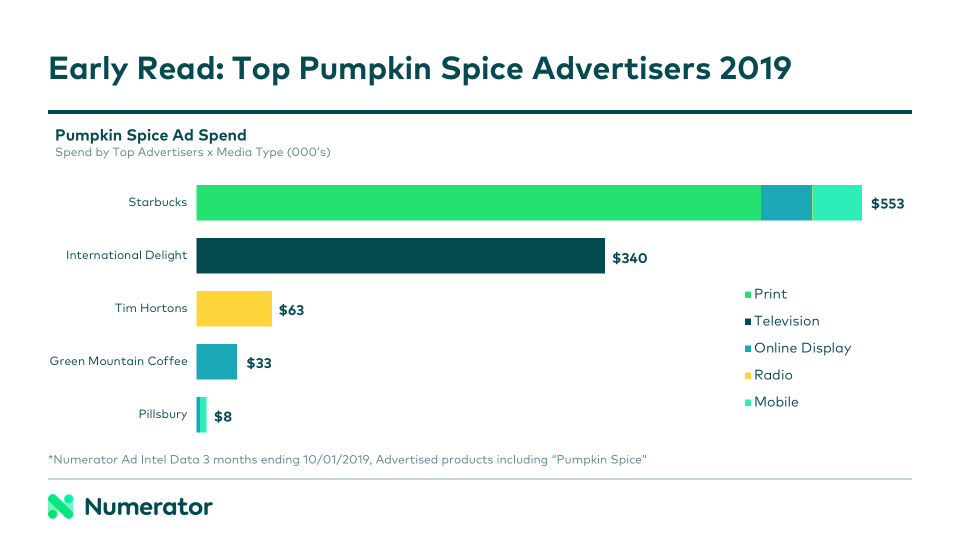 Historically, most big players have spent a large portion of their pumpkin spice ad dollars in the month of October, so we’d expect the leaderboard to shift as the season continues. Ad spend for pumpkin spice totaled over $4.2 million last year, driven primarily by Coffee-Mate and their heavy investment in TV. Though they’re not on the list yet for 2019, it’s likely they’ll enter the game sometime this month, which is when they began running pumpkin spice ads last year.

Pumpkin spice is a big topic on social media, so we’d be remiss not to mention the importance of a social advertising strategy for top competitors. This year, 71% of advertisers have included a social presence in their pumpkin spice campaigns, up from 64% last year. Some advertisers like Starbucks and International Delight are using social to compliment other ad types, while others like Tazo, SPAM and Burt’s Bees have gone purely social with their pumpkin spice ads. In a testament to the importance of social media advertising, we asked our Starbucks buyers how they typically hear about seasonal menu items like the PSL and 37.7% said social media, which was second only to in-store with 56.1%.

Our data shows that the Pumpkin Spice Latte over-indexes with Millennials, which certainly aligns with widely held PSL stereotypes. But if you’re looking for a plot twist, you’ve come to the right place: we also found that Starbucks PSL buyers are more likely to be male (17%) than non-buyers (15%). Looks like females aren’t the only ones who like to embrace their inner basic!

While understanding this demographic is useful, the Starbucks PSL buyer is not necessarily representative of the full pumpkin spice market. In fact, only 28.7% of PSL buyers say they have purchased pumpkin spice products from somewhere other than Starbucks. So who is driving pumpkin spice sales in traditional channels and categories? That honor appears to go to white, suburban, female boomers.

When it comes to pumpkin spice, the appeal seems to be more universal than previously thought. If you’re trying to market a pumpkin spice product, don’t fall into the trap of limiting your target audience to a single, stereotypical demographic.

Pumpkin spice season is in full swing, but soon the next fad will hit, bringing with it more opportunities to analyze shopper behavior and competitive ad strategies. How can Numerator help you spice up your insights? Reach out today.