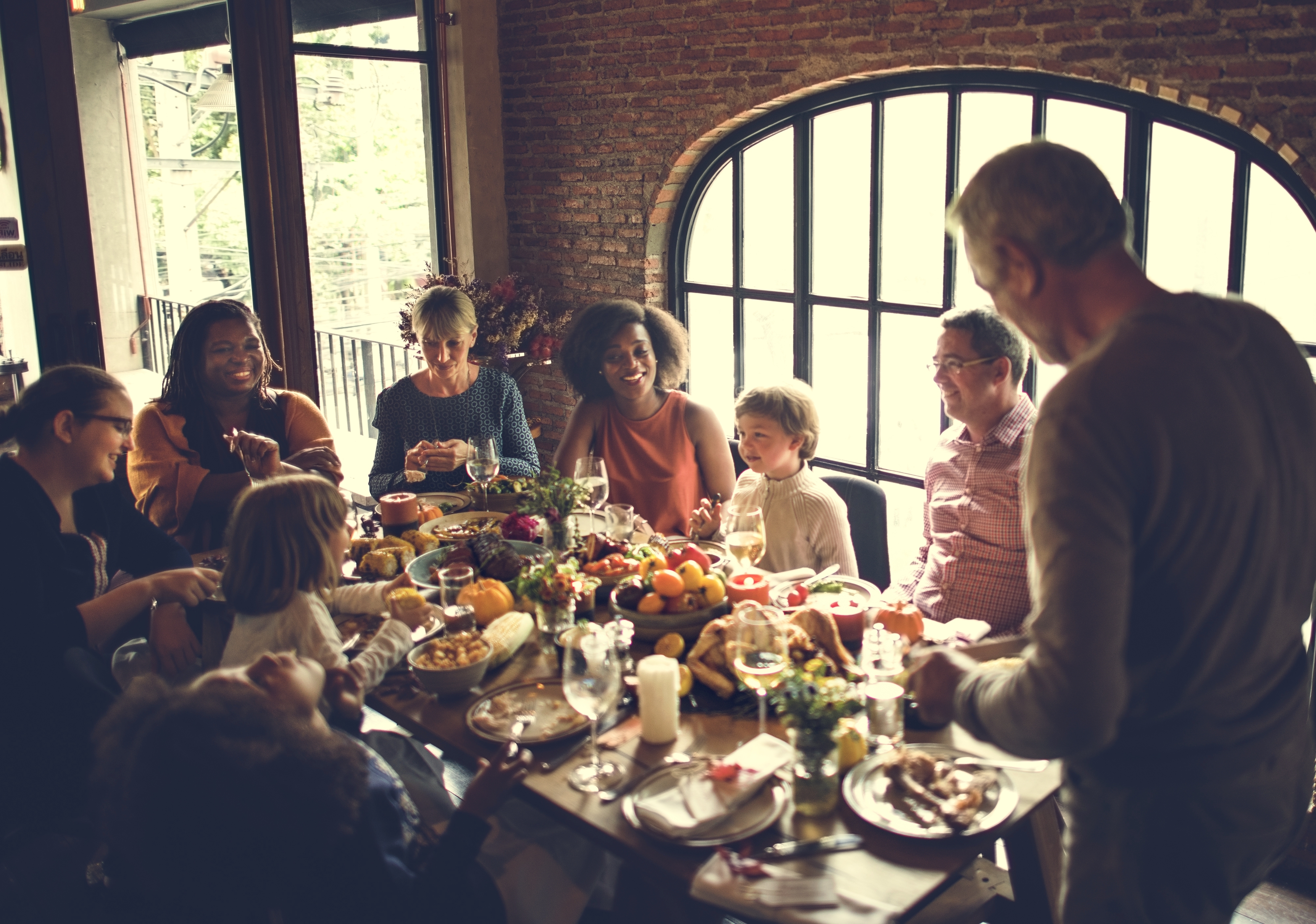 *Note: We hope you find these insights from past years useful, and we know 2020 brings with it new challenges & considerations. For the most up-to-date insights, check out our latest blog on 2020 Thanksgiving Predictions & Planning.

While shoppers may have their minds on beach days and BBQs, many CPG retailers and manufacturers have visions of turkeys, champagne and holiday cookies dancing in their heads. When it comes to the holiday season, most CPG retailers and manufacturers focus on the big feasts – Thanksgiving, Christmas and New Year’s Eve. But there’s an entire season of celebrations happening. This time of year is huge for CPG, and it all gets underway in just six months.

As you plan your holiday strategies, we thought it would be helpful to take a look back at the 2018 holiday season. Our Numerator data not only provides insights into holiday shopping trends and behaviors, but can also help you determine which data gaps you need to plug if you expect to win the 2019 holiday season.

Eggnog and punch aren’t the only things that are spiked during the holidays. As expected, traditional meal and dessert items like turkey, dressing and pie tend to see spikes around Thanksgiving. However, a variety of other categories make their way to checkout much more frequently when December rolls around.

For example, spending on baking chips and bars nearly doubles leading up to Thanksgiving but more than triples right before Christmas. 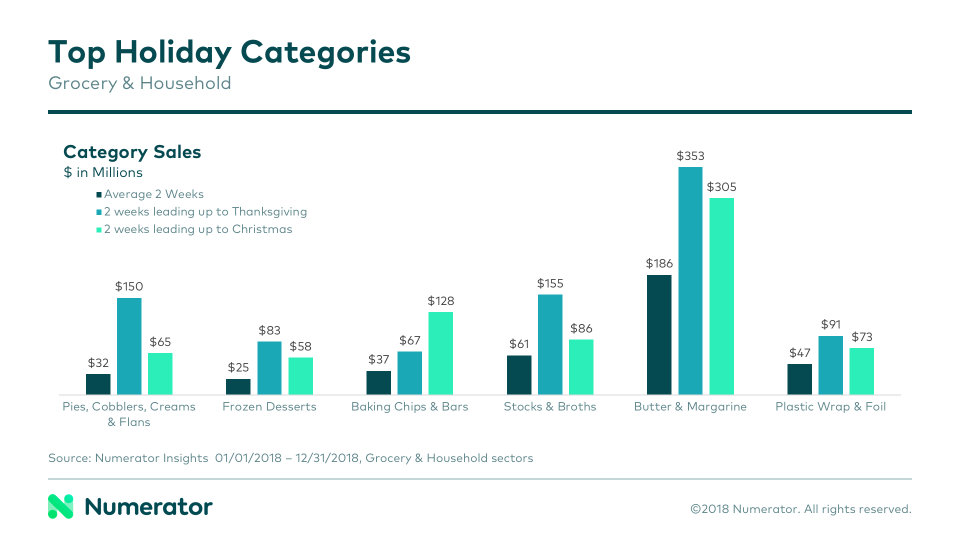 More than half of November turkey dollars were spent during the week leading up to Thanksgiving. That means a large amount of grocery dollars are still up for grabs as people take Thanksgiving preparations down to the wire. Shoppers were also less loyal when purchasing Thanksgiving staples, with just 39% of shoppers purchasing all of their Thanksgiving groceries at their regular store. Turkey was the item most likely to be purchased elsewhere, followed by pies and vegetables.

Retailers should be exploring ways to hold onto these purchases and win leaked trips from competitors. “Win the turkey, win Thanksgiving” still applies, as the turkey was often included in the “final haul” shopping trip, along with everything shoppers needed to prepare a Thanksgiving feast. When the turkey was in the basket, shoppers spent more in other categories, and the average basket spend more than doubled from $41.62 to $93.30!

As is the case with turkey, not all shoppers simply bought groceries from their regular store. Six in 10 shoppers used print circulars to find deals on groceries, and more than half compared prices before choosing where to shop. Fittingly, the most heavily promoted categories during the holidays were aligned with many categories that saw spikes in sales last year. 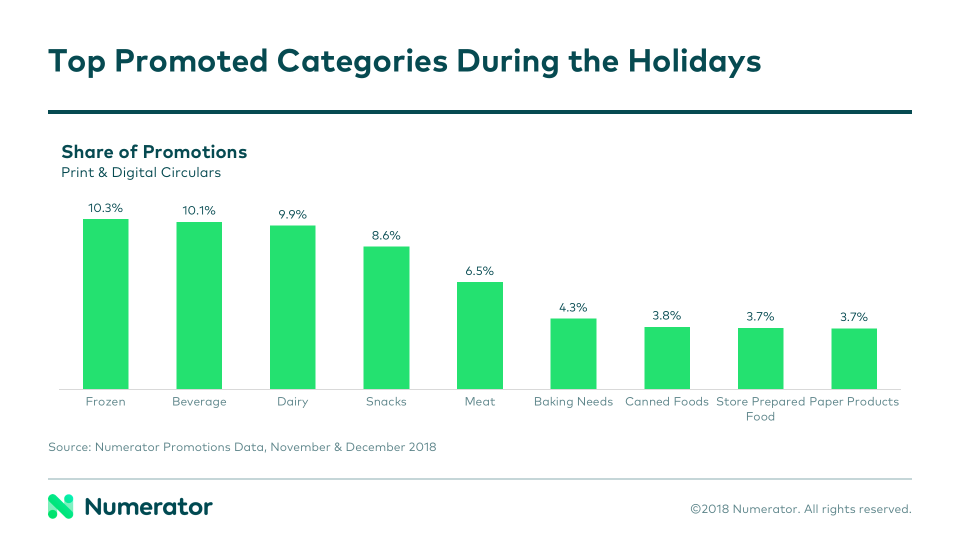 Last Call (of the Year) for Alcohol

More than $2.9 billion in alcohol sales occurred in the final three weeks of 2018. For the entire year, alcohol sales were highest during Christmas week ($1.2 billion), followed by the weeks of Thanksgiving ($962 million), 4th of July ($941 million), Memorial Day ($928 million), New Year’s ($879 million), and pre-Christmas ($855 million). Wine and spirits outperformed beer in the weeks leading up to Christmas and New Year’s, while beer sales were stronger overall for the Year.

When we look at alcohol sales by generation, the alcohol industry will likely see a shift in holiday sales by category as Millennial and Gen Z buying power continues to grow. Could that mean farewell to white wine in December and hello to high-end brews? 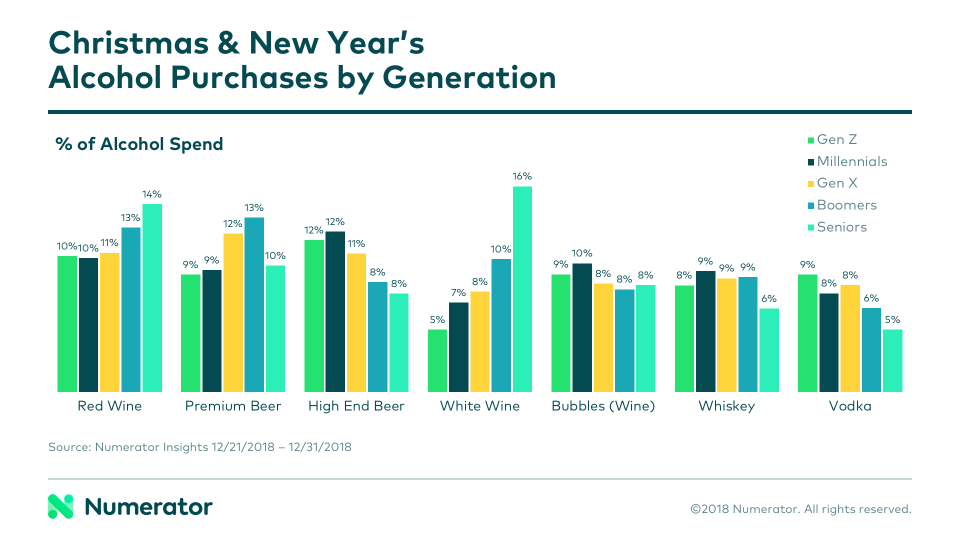 The right data can prove or disprove assumptions, provide insights that you hadn’t considered, and guide your decision-making as you develop your marketing strategies for the holiday season. For a more in-depth look at holiday CPG sales, download our 2019 Holiday CPG guide and let us help you win the holiday season.